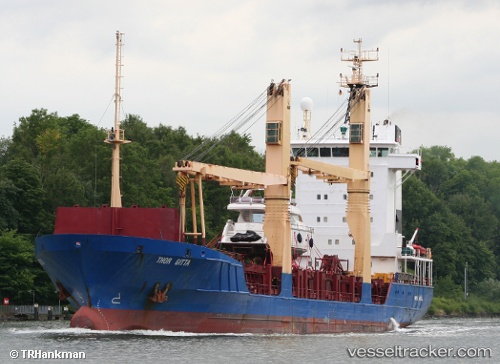 After she was slightly damaged in a collision with the tug "Mahanuwara" on Sep 17, the "Thor Gitta" finally went alongside the "Angel 1" on Sep 18, 2011. A second freighter was to reach Mauritius in the coming days for the transfer of bags of rice damaged by sea water. The bailout of the "Angel 1" will finally take place in three weeks, if all goes accroding to plan on October 9. This is the date suggested by the salvage team. Bad weather repeatedly disrupted the operation. On September 12 the work had to be suspended due to rough seas after the "Thor Gitta", specially chartered in Durban, was only able to transfer 1,620 tons of rice to Port Louis. When returning back on the site on Sep. 17, the ship suffered the accident with the Sri Lankan tug "Mahanuwara".

The loading of the second former Aran Island ferry, Clann Eagle I onto the cargoship Thor Gitta in Galway has finally been completed on Friday, Afloat magazine reports. The 4,078 tonnes vessel is scheduled to depart the mid-western port today evening on the 8,300 mile delivery voyage to Mauritius. Despite freshening winds the 169 gross registered tonnes ferry was winched out of the waters of the port's Dún Aengus Dock. In total the operation took six-hours which saw the delicate positioning of the 27m long ferry between the ship's two deck-mounted cranes and lowered onto the cargo-deck. http://www.afloat.ie/port-news/port-and-shipping-news/item/15422-good-friday-in-galway-as-second-ferry-is-loaded/

Hopes that the "Thor Gitta" with two former Aran Island ferries would leave Galway harbour yesterday were dashed as the luckless project ran into new difficulties. It was expected that the second of the ferries, Clan Eagle 1 , would be lifted alongside its sister ferry Clan na nOileáin on board the Thor Gitta cargo ship yesterday morning. However, problems organising the port rotation of cargo caused yet another delay. The Thor Gitta has been in Galway harbour for more than two weeks now, and according to Galway harbour master Capt Brian Sheridan, it will not be ready for the seas until this evening at the earliest. Irish Times http://www.irishtimes.com/newspaper/ireland/2011/0422/1224295253737.html