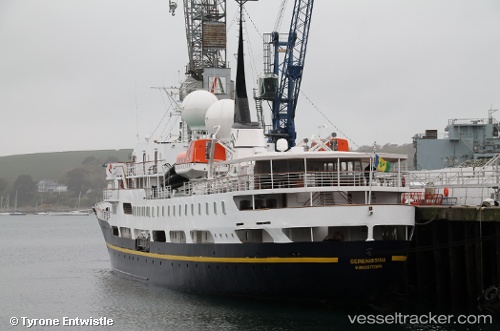 Divers were to survey the hull of the "Serenissima" on May 21 in the Oben Bay after the vessel was refloated at 1.10 a.m. to ensure its seaworthiness. High tide had been around midnight. The vessel had been aground at the Corran Ledge with the bow but had remained afloat at the stern. During an initial attempt at refloating the ship used its own engine with the lifeboat providing assistance by pulling at the stern. Unfortunately this attempt was hampered by a strong wind blowing the ship towards the shore, and was unsuccessful.It appeared the "Serenissima" went the wrong way round a navigation buoy, as she encountered the Isle of Mull ferry, when she entered Oban Bay in Argyll from the north. The vessel was completing an 11-day ‘Great Gardens and Houses of Britain and Ireland” itinerary which left Poole on May 11. The ship was scheduled to depart from Oban ton May 21 on a seven-night Hebridean cruise. The "Serenissima", which had 112 people on board, among them 61 passengers, had became stuck in sand and gravel at about 6.30 on May 20. According to Stornoway Coastguard there were no reports of injuries and no signs of pollution or damage to the ship. Reports with photos: http://www.bbc.co.uk/news/uk-scotland-glasgow-west-22603212 http://news.stv.tv/scotland/226158-coastguard-called-out-after-passenger-ship-runs-aground-in-oban-bay/ http://www.heraldscotland.com/news/home-news/cruise-liner-is-stranded-after-entering-oban-the-wrong-way.21137257 http://www.obantimes.co.uk/2013/05/20/cruise-liner-goes-aground-in-oban-bay/

Serenissima back to safety after running aground in Oban Bay

A passenger ship has been brought safely to anchor after it ran aground on the west cost of Scotland. The Serenissima, became lodged on sand and gravel in Oban Bay at around 6.30pm on Monday, May 20. None of the 61 passengers or 51 crew members were injured during the incident. The Serenissima, an 87-metre vessel, ran aground at the bow at a spot known as the Corran Ledge as it made its way from Ireland to the port of Oban. The Martime and Coastguard Agency (MCA) said there were no reports of injuries, and no reports of pollution or of water entering the ship. Strong winds hampered initial attempts by the crew and the Oban RNLI lifeboat team to rescue the vessel, but it was eventually re-floated at about 1.10am. The Serenissima is now anchored in Oban Bay and will undergo a dive inspection later on Tuesday. More and pics on http://news.stv.tv/highlands-islands/226173-passenger-ship-serenissima-back-to-safety-after-running-aground-in-oban-bay/

As Maritime Matters reports, Premier Cruises, Ltd., no relation to the previous cruise line of the same name, will begin service in April, 2013 with the 117-passenger SERENISSIMA on voyages within Europe. The ship was originally built in 1960 at the yard of A/S Trondheims Mek. Verksted, at Trondheim, Norway as the HARALD JARL for the Norwegian Coastal Express service. It was the first full-size Hurtigrute ship to be built in Norway since 1942. During its early career the vessel sailed for the coastal company Det Nordenfjeldske Dampskibsselskab (NFDS) and later with Troms Fylkes Dampskibsselskab (TFDS) during a 41 year career spent exclusively in Norway. In 2001 the ship was sold and remarkably embarked on a second career as an expedition ship under the new name of ANDREA beginning in 2002 which took her to far flung ports in both the northern and southern hemispheres. Elegant Cruises & Tours promoted voyages on the ANDREA until they ceased operations in April of 2009. The ship was seized and laid up at Split, Croatia. More to read at http://maritimematters.com/2012/04/premier-cruises-to-return-1960-vintage-vessel-to-service/