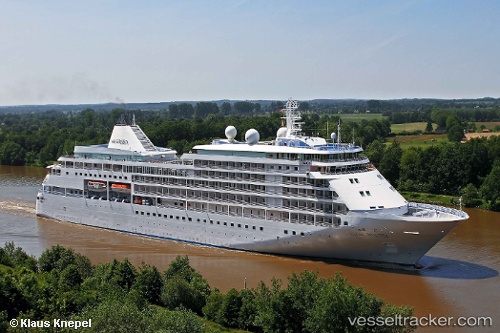 The 'Silver Whisper' en route from Cherbourg to Tilbury, suffered a breakdown of one of its engines while transiting the Dover Strait in position 51 10 56.4N, 001 46 03E, on Sep 25, 2019, at 10 a.m. The vessel was still making way at 10 knots and the crew was fixing the engine while en route. Surveyors and inspectors were to be notified to arrange a visit when alongside at the cruise terminal where the ship arrived on Sep 26 at 11.40 a.m.

Silversea Cruises is to carry out partial refurbishments onboard Silver Wind and Silver Whisper in December 2017. Part of the line’s fleet-wide refurbishment programme launched at the end of 2016, Silver Whisper’s renovation will incorporate technical improvements and a ‘significant redesign’ of public areas. Many of the public areas will take inspiration from the décor on Silversea’s new flagship Silver Muse, such as the new carpets and other upgrades in La Terrazza and the Observation and Panorama lounges. Silver Wind will be upgraded in a similar format, also taking inspiration from Silver Muse. The casino will also be fitted with new carpets and reupholstered chairs, while the floors will be updated in the spa and beauty salon. “Silver Muse has been a sophisticated inspirational milestone for our brand,” said Roberto Martinoli, Silversea’s CEO.