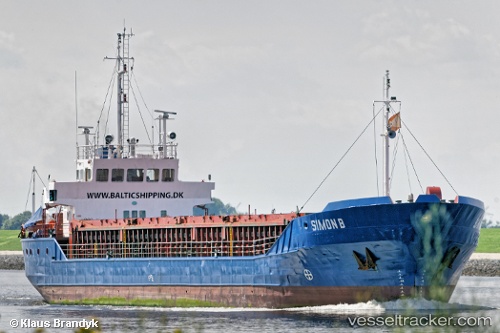 On Oct 19 the Dutch captain of the "Simon B", was sentenced for being drunken at the helm the Court of Aalborg. The 33-year-old captain was sentenced to 20 days imprisonment, a fine of 10,000 Danish crowns and deprival of the right to fly ship in Danish waters for one year. The captain had an alcohol level of 2.45 per mille on July 10, when the ship allided with a dock in Aalborg.The police had found the visibly intoxicated captain on the bridge. A test showed that the captain had a blood alcohol level of 2.07 per mille. While the man not even showed up in the courtroom, the case against him was settled in the presence of his lawye. The 33-year-old captain did not plead guilty but has not been able to explain why a subsequent blood test showed a BAC of 2.45.

On Jan 18, 2015, at 4 p.m. the "Simon B" allided with the fairway buoy 3 in Stralsund during a berthing manoever as the ship was entering port coming from Kolding. The buoy suffered scatches and a dented radar reflector. The ship also suffered scratches at port side. The master stated that a strong current had caught the ship and pushed against the buoy. The "Simon B" was allowed to sail again and left port on Jan 19 at 3.30 p.m. bound for Hobro.

Coming from Varberg, the "Simon B" had problems to enter the port of Aalborg on July 10, 2014, around 4 a.m. First the ship sailed past the assigned dock, then a new berth was allocated by the port staff. When the coaster finally docked there with some difficulties, it allided with the quay. While damage remained limited, the maneuver caused the port staff to call the North Jutland Police. The captain had to undergo a breathalyzer test which showed an alcohol level of 2,07 per thousand. A blood sample was taken to determine the alcohol level of the master while he was at the helm of the ship. He will, however, face a hefty fine and was detained by the police.