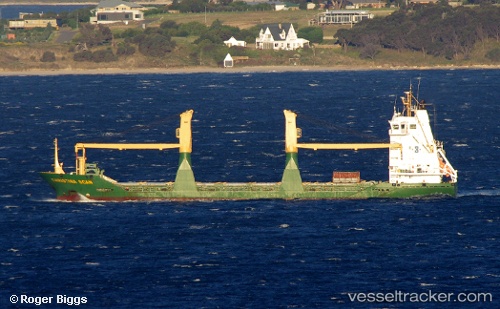 The "Tiona", en route from Rotterdam to Bilbao with 14 crew members on board, sailing in ballast, suffered a turbo charger failure in position 51 17 24 N, 001 49 27 E, 19 miles off the British coast, while waiting to anchor near mid falls buoy on March 16. It dragged its anchor after having been unable to restart the engine 15 miles from The Downs. Though the ship was within British waters, the CROSS Gris Nez offered the French tug "Abeille Languedoc" to assist, which was immediately agreed. The freighter meanwhile drifted closer towards the coast in stormy weather. At 10.30 a.m. the tug arrived on scene ready to tow the vessel to Dunkirk which was 36 miles away. After a commercial towing contract was acquired, the tug pulled the ship into the port on March 17 at 7 a.m. She left the port again on Apr 3 at 4.30 p.m. At 6 p.m. she moored on Calais anchorage in pos. 51° 4.68' N 001° 50.17' E for order.

On July 14, 2017, at 11 a.m. the "Tiona" was disabled and went adrift off Cabo de Palos. She had sailed from Cartagena on July 13. The salvage tug "Clara Campoamor" was called to assist and took the ship in tow. It was pulled back to Cartagena and moored at the breakwater at 8.45 p.m., remaining there since. Photos: https://pbs.twimg.com/media/DFGqjDNXoAAb096.jpg https://pbs.twimg.com/media/DFGqlEtXgAAFuSS.jpg