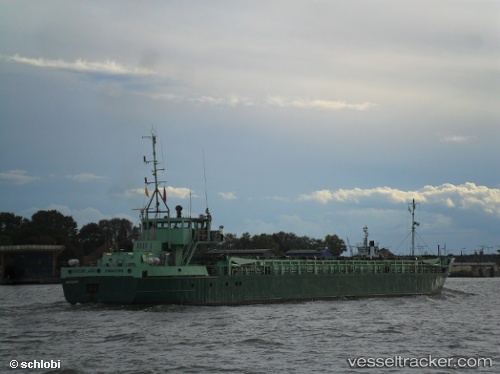 During the late afternoon of Nov 9, the "Snow Lark" was refloated by two tugs, among them the Danish "Frigga" (IMO: 9175250), which had arrived at 1 p.m. at the grounding site. She was towed into the port of Landskrona at 5.55 p.m. The Swedish Coastguard was on scene to ensure that no contamination occurred. The ship, loaded with bauxite, an aluminum clay, was on its way to Landskrona. The cargo was destined for further transportation to northwestern Skåne. The ship was released by the Swedish Transport Agency in the evening of Nov 14 after an inspection. An engine failure was found to have caused the grounding on Nov 8, which was meanwhile fixed. The ship left the port of Landskrona at 8.10 p.m. and dropped anchor in pos. 55° 54.00' N 12° 46.86' E for order, Swedish report with photos: https://www.hd.se/2018-11-09/bat-pa-grund-utanfor-landskrona

The "Snowlark" ran aground in the Øresund on Nov 8, 2018, at midnight off the entrance to Landskrona in pos. 55° 52.07' N 012° 48.30' E. The vessel has tried to refloat with own power, but later gave up the attempt. It had come from Rotterdam and was loaded with clay bound to to Höganäs Bjuf. it was planned to start with the salvage work on Nov 9. No leaks and no injuries reported. Swedish report with photo: https://www.expressen.se/kvallsposten/just-nu-handelsfartyg-fastnade-i-inseglingsranna/

On July 31, 2017, the Danish police got a report of a possible pollution originating from the "Snowlark" in the Vejle Fjord. The ship has unlaoded a cargo of lime in Vejle. The captain stated that the crew had not cleaned the cargo spaces, but that there had been rain showers in the area that probably had washed a small ampount of lime from the deck into the sea. A Danish tug, which passed the area shortly after, could not see any pollution around the ship.