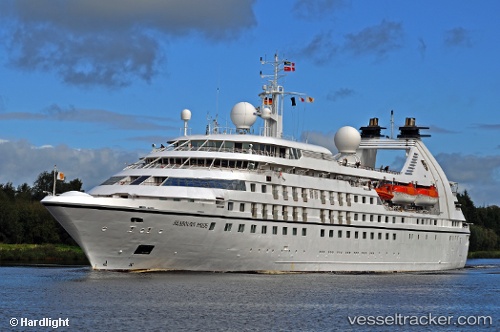 The U.S. Coast Guard cleared the "Star Pride" after it passed an inspection, and it was back on its way to New York in the morning of Sep 8 to make its maiden docking in Manhattan. There were more than 350 people - 191 passengers and 160 crew members - on board when the ship became stranded the previous afternoon off Cuttyhunk Island. There was a strong vibration for about five or 10 seconds, then the cabin lights went out, and the ship slowed down and became adrift. During the time the ship was without propulsion, the "Star Pride" was on emergency generator power including power to navigational equipment and essential safety systems as well as basic comforts for the passengers and crew. Around 9 p.m. the ship was on the move to Newport, Rhode Island, where it was inspected.

Cruise ship berthed in Newport after power was restored

US Coast Guard crews and the Buzzards Bay Task Force launched on Sep 7, 2018, after the "Star Pride" became disabled about two miles off the coast of Cuttyhunk. The captain of the "Star Pride" called watchstanders at Coast Guard Sector Southeastern New England at about 3:20 p.m., reporting the ship lost power and was disabled. Coast Guard crews and the Buzzards Bay Task Force surrounded the vessel the ensure the safety of the passengers and crew of the ship. The crew of the "Star Pride" was able to safely anchor outside the channel and regained power at 4.40 p.m. The Coast Guard has ordered the vessel to have a Coast Guard inspection prior to completing its scheduled trip to Manhattan. Under tug escort, the "Star Pride" proceeded to Newport where she berthed on Sep 8 at 5.30 a.m. to await inspectors. The cruise ship had 191 passengers and 160 crewmembers aboard. Units involved in the response included the Coast Guard Stations Woods Hole, Menemsha and Cape Cod Canal, the Coast Guard Cutter "Cobia", the Coast Guard Air Station Cape Cod and the Buzzards Bay Task Force. Reports with photos and video: https://www.bostonglobe.com/metro/2018/09/07/cruise-ship-with-people-board-becomes-disabled-buzzards-bay/nHExpXOFvDg3LNQKX8rtjK/story.html https://boston.cbslocal.com/2018/09/07/cruise-ship-buzzards-bay-westport-adrift/ http://www.fox5dc.com/news/national/cruise-ship-stranded-off-massachusetts-coast https://turnto10.com/news/local/cruise-ship-adrift-in-buzzards-bay http://www.dailymail.co.uk/news/article-6144997/Cruise-ship-carrying-350-people-stranded-Massachusetts.html http://www.wbrz.com/news/cruise-ship-carrying-350-people-stranded-off-massachusetts/ https://coastguardnews.com/coast-guard-local-partners-respond-to-disabled-cruise-ship-in-buzzards-bay/2018/09/07/