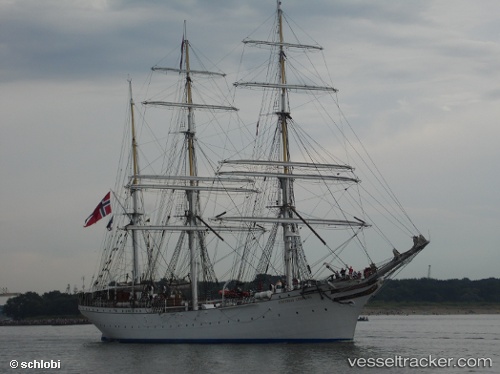 On Nov 15, 2018, a sick crew member needed to be medevaced from the "Statsrad Lehmkuhl" off the Spanish coast. The SAR helicopter from Gran Canaria was deployed, and rescue swimmer David Jayo descended ono the barque to assist in disembarking the man. Photo: https://pbs.twimg.com/media/DsHHBLmWsAAW2iD.jpg

The Helimer helicopter of the air base Tenerife carrierd out a medevac from the "Statsraad Lehmkuhl" off El Hiero on Oct 17, 2016. The barque was enroute from Bregen to Norfolk at that time. Photo: https://pbs.twimg.com/media/Cu-wTHYXYAAj-QM.jpg:large

In crisp blue uniforms and heavy-soled black boots, about 30 Norwegian naval cadets climbed the rigging of the Statsraad Lehmkuhl, one of the largest and oldest sailing ships in the world, as it glided into the Inner Harbor on Wednesday morning. The nearly football-field-length vessel passed the large cargo cranes at Seagirt Marine Terminal and later the grassy tip of Fort McHenry, leaving the Domino Sugars sign in the distance with Baltimore's skyline in full view ahead. The 102-year-old ship was completing a six-week voyage from Norway to Baltimore, where it will remain for the week. "Baltimore is perfect for us, to have a ship in the middle of a city," where the public can walk by, said Marcus Seidl, one of the ship's captains. The public can tour the Statsraad Lehmkuhl for free between 10 a.m. and 4 p.m. Saturday and Sunday. http://www.baltimoresun.com/news/maryland/baltimore-city/bs-md-norwegian-tall-ship-20151104-story.html