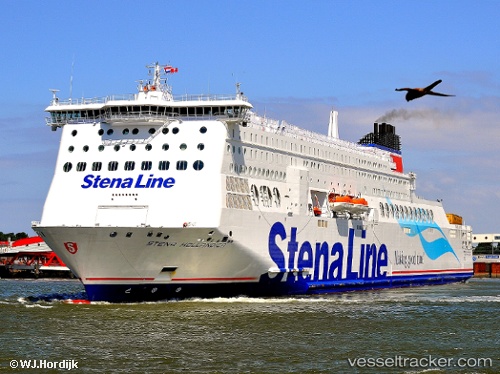 On Feb 18, 2016, an employee who was working with a cleaning liquid on the "Stena Hollandica" in Hoek van Holland was involved in a minor incident with a hazardous substances. The man suffered burns when using caustic soda as a cleaner. The man was put in the shower and later taken to a check wat the hospital Maasstad by ambulance. Dutch report with photos: http://www.westlanders.nu/nieuws/gewonde-bij-bedrijfsongeval-vrachtschip-stena-line-16347/

Two pregnant women and children were among 68 suspected illegal immigrants discovered on several lorries at Harwich International Port as they disembarked from the "Stena Hollandica" on June 4, 2015. Four Polish lorry drivers have been arrested on suspicion of immigration offences. The ship had sailed from the Hook of Holland to Harwich at 2.15 p.m., arriving in Harwich at 7.45 p.m.

Danish car owners have found a new route to England

Stena Line reaps the benefits of DFDS's closure of its Esbjerg-Harwich service. Danish car owners have been quick to adapt following the decision by DFDS to close its route between Esbjerg and Harwich in late September. Now, they're going Dutch and they're going thrice as much from there.The Swedish-owned ferry line Stena Line has experienced a 200 percent increase in the number of its Danish customers on its route between Hoek van Holland and Harwich.”It's surprising and very pleasing that the Danes are showing such interest in our route between the Netherlands and England,” Thomas Christiansen, the sales and marketing head at Stena Line's Danish headquarters in Frederikshavn, said in a press release.”So we've decided to exert more energy attracting even more Danes to the route.” But there is some considerable driving involved, because the distance from the Danish-German border to Hoek in the Netherlands is between 600 and 650 kilometres. Nevertheless, it's a shorter journey in terms of total time compared to the closed route between Esbjerg and Harwich, which took 18 hours, as the ferries used on the route – Stena Britannica and Stena Hollandica – are among the ferry line's newest, from 2010.There are two daily departures from Hoek, at 14:30 and 22:30. Should travellers take the early ship, they will arrive in England at 20:00, while the late ship will bring them to Harwich at 06:30 the following morning. Source : The Copenhagen Post