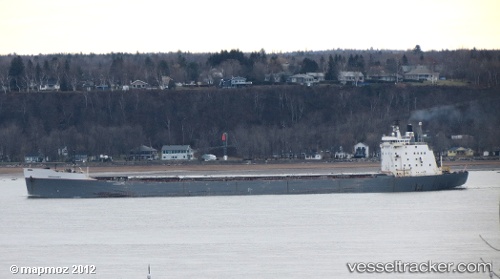 The Transportation Safety Board of Canada (TSB) is continuing to investigate the engine room fire on the 'Tecumseh' on Dec. 15, 2019, near Zug Island on the American side of the Detroit River. The ship remained berthed in Windsor. The fire caused extensive damage to the vessel. The TSB deployed a team of investigators to the Tecumseh on Dec. 17 to gather information and access the occurrence. The TSB's investigation is being led by François Dumont, who has been with the organization since 2013.

The Transportation Safety Board of Canada started investigating the fire aboard the 'Tecumseh' on the Detroit River near Windsor. A team of TSB representatives went onboard the ship at its current dock off Maplewood Drive on Dec 17 in order to gather information and assess the incident on Dec. 15, when the bulk carrier was in U.S. waters near Zug Island. The investigators started their data collection and documenting of what has g happened. They will be looking to photograph the site and speak with witnesses. It was still too early in the investigation to estimate how long it would take. There were no reports of pollution. Vessel traffic on the Detroit River was not affected. At the time of the fire, the 'Tecumseh' was en route to Windsor from Thunder Bay. It was carrying canola seed, which has a high oil content. Report with photos: https://windsorstar.com/news/local-news/investigation-underway-into-fire-onboard-freighter-that-drifted-to-windsor

The U.S. Coast Guard received notification from Joint Rescue Coordination Centre Trenton on Dec 15, 2019, at 2 p.m., that the 'Tecumseh', coming from Thunder Bay and bound to the ADM Elevator at Windsor, had an engine room fire near Zug Island on the United States’ side of the Detroit River. Coast Guard Sector Detroit diverted the Coast Guard Cutter 'Bristol Bay' to the scene and launched Coast Guard Station Belle Isle’s 45-foot Response Boat-Medium and a MH-65 Dolphin helicopter from Coast Guard Air Station Detroit to assess the situation. The vessel drifted to into Canadian waters where it dropped anchor near Windsor, Ontario. The CO2 system was activated. A firefighting team boarded the ship and extinguished the fire after all 16 crewmembers were safely disembarked and evaluated by local EMS. There was no report of pollution and no impact to vessel traffic. The U.S. Coast Guard worked with the Canadian Coast Guard, Transport Canada and Windsor Harbor Master through the night to coordinate response efforts and provide support as needed and will coordinate any investigation into the cause of the fire. At 8.20 p.m. the ship was towed to the quay in Detroit by a tug and surrounded by an oil boom as a precaution. Reports with photos: https://windsorstar.com/news/local-news/fire-disabled-freighter-drifts-across-detroit-river-towards-windsor https://windsor.ctvnews.ca/crew-members-evacuated-after-ship-fire-in-detroit-river-1.4732147 https://www.cbc.ca/news/canada/windsor/us-coast-guard-engine-room-fire-tecumseh-ship-1.5397694?__vfz=medium%3Dsharebar