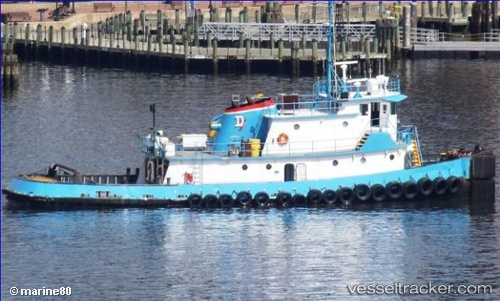 Damaged tug to be towed to Maryland

Tugs and rescue boats of the US Coast Guard started salvage operation after the fire aboard the "Thomas Dann". The towed barge was delinked from the troubled tug and firefighters extinguished the flames within several hours. The ship was to be towed to Marineland for repairs and inspection, but just after safety was ensured.

The crew of the "Thomas Dann" went into a life raft after the tug caught fire in the afternoon of July 22, 2016, several miles off the coast of Marineland, Florida, south of Jacksonville. The tug was towing a barge owned by the Express Maritime Inc. The fire was reported at 5.30 p.m. Early reports indicated the possibility of explosions on board. Two fireballs were witnessed from shore. The Coast Guard, Flagler County Fire Rescue’s Marine Unit, and Flagler County Fire Flight all responded to the ship which was five miles offshore. By 6 p.m., the six survivors were reported to be safe, picked up by the fishing vessel "Rootless" which was on the way to Daytona from Saint Augustine, and taken to Ponce de Leon. Flagler County Fire Rescue’s swimmers were in the helicopter with a raft, ready to jump in the ocean to pick up the survivors. A Coast Guard 45-foot boat from the Station Ponce De Leon and an MH-60 Jayhawk helicopter crew from Air Station Clearwater were launched too. Reports with photos and video: http://flaglerlive.com/96989/tugboat-rescue/ http://spacecoastdaily.com/2016/07/u-s-coast-guard-rescue-crews-responds-to-100-foot-tug-and-barge-fire/ http://www.uscgnews.com/go/doc/4007/2868450/

A crane sliced through scaffolding under Brooklyn Bridge in the night of Mar 14, 2012, ripping a 20 ft hole in scaffolding under the bridge in New York. The crane was being towed southbound along the East River by the "Thomas Dann" when it struck the bridge. Sheet metal was left hanging down from the wrecked scaffolding, which is wrapping the bridge's underbelly while it is painted.The Transportation Department confirmed no one was injured and the bridge suffered no structural damage. Firefighters and police had rushed to the accident site at 8 p.m. About 100 firefighters, police and staff from the Office of Emergency Management responded. Police shut down the bridge as Department of Transportation workers assessed the condition of the bridge. It re-opened shortly after 11.30 p.m. Reports with photos: http://www.thesun.co.uk/sol/homepage/news/4194275/Crane-rips-50ft-hole-in-Brooklyn-Bridge.html http://www.dailymail.co.uk/news/article-2114730/It-like-building-collapsing-Drama-Brooklyn-Bridge-closed-crane-tugboat-scrapes-underside-sheeting.html?ito=feeds-newsxml