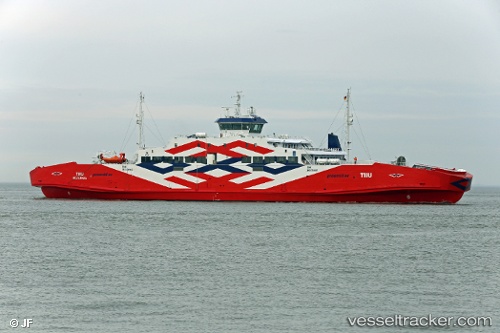 Ferry out of service for summer season after bottom touch

The "Tiiu" had a double bottom touch in the evening on July 28, 2017, around 6.30 pm. while en route from Rohuküla to Heltermaa upon Hiumaa island in the Baltic Sea, halfway between the Estonian mainland and island. The ship was on autopilot, and after turning on the Rukkirahu channel, it veered to starboard side. The senior officer at the helm tried to change the course with an automatic steering wheel, but to no avail. Next, he tried to turn off the autopilot, but it did not succeed. He then activated the necessary stops several times until the automatic steering wheel finally turned off. But it was too late, the ship had got out of the fairway and hit the bottom, listing severely for a moment and suffering bow damage. Then the ferry regained its balance and continued its journey, but once again touched bottom. Among the passengers there was a slight panic feeling that something serious happened. The captain who was staying in his cabin and feeling the jumble of the ship, ran right onto the bridge where he saw how the officer attempted to turn off the autorole (automatic steering wheel). Eventually, with the twist of the knuckles, it finally switched off and they were able to bring the vessel back to the fairway without touching the bottom once again. The ferry returned to Rohuküla, being monitored on its way back, for investigations and surveys. The first estimate was that there may have been a technical malfunction in which the ship's control system refused to respond. It was, however, to be drydocked iin the first half of August for a thorough hull check and repairs of the hull damaged caused by the stones on the sea bottom. She left the port of Rohuküla on Aug 7 at 8.45 p.m. and headed to the Turku Repair Yard Ltd. in Naantali, arriving there on Aug 8 at 9 p.m. The "Tiiu" was expected to be out of service for at least 1,5 months. The ferry “Hiiumaa” (IMO: 9481805) was inserted by operator TS Laevad on the Rohuküla-Heltermaa route in addition to the “Leiger” (IMO: 9762675) until the “Tiiu” returns. She left for Rohukülla's the first time on Aug 2 at 1 p.m. Repairs of the "Tiiu" were completed on Sep 5 when she left the Turku Repair Yard Ltd. in Naantali after trials at 5 p.m. and headed to Rohukyla, ETA Sep 6, 9.45 a.m. Estonian report with animation: http://www.postimees.ee/4197145/postimehe-rekonstruktsioon-tiiu-pauguga-loppenud-teekond