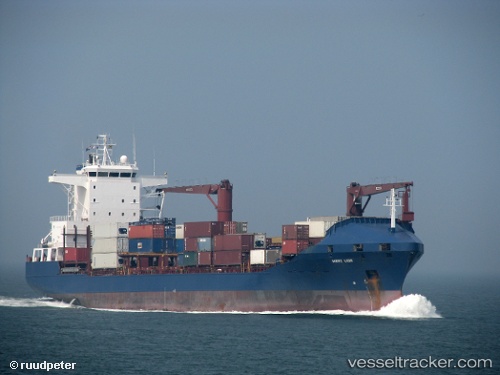 Freighter has long been suspected in smuggling arms

The 'Roseline A' which was controlled by the German Navy in the Mediterranean, has long been suspected of being used for illegal arms deliveries to Libya according to a secret EU document written for the United Nation's arms embargo experts. The inspection had triggered severe criticism from the government in Ankara. Turkey assessed the operation as unlawful and accused Germany and the EU of unauthorized use of force, but there were sufficient reasons to believe that the ship might have been violating the UN arms embargo against Libya. The German soldiers proceeded in a highly professional manner and inspected the ship in accordance with internationally agreed and standard NATO procedures. It was still unclear whether the "Roseline A" actually had weapons or other prohibited goods on board. The German Navy had to stop the search of the ship prematurely on Nov 22 because Turkey, as the flag state, officially protested against the operation. A search of ships against the resistance of the crew and the flag state is currently not possible in the frame of the EU Operation Irini. One of the reasons for this is that the special forces required for such dangerous missions have not yet been available. According to the Turkish Foreign Ministry, the ship had loaded paint materials and relief supplies. However, this has been questioned, and the Turkish government has to answer the question why it was resisting an inspection of the freighter if it has allegedly not been used for smuggling drones and other military equipment. The rumble from Ankara only allows the conclusion that something should be hidden there. The secret document is the first six-month balance sheet on the EU mission. It also points out that the participating EU countries did not support the operation to the extent planned from April to the end of September. The number of available ships has always been below the minimum requirements. In addition, the Italian flagship "ITS Margottini" had to be taken out of service earlier than planned on Sep 26 after there were around 80 corona cases on board.

The German Federal Defense Minister Annegret Kramp-Karrenbauer (CDU) has rejected Turkey's criticism of the deployment of German soldiers to control the 'Roseline E' because of suspected arms deliveries to Libya. "The Army soldiers behaved completely correctly. They did what is required of them within the framework of the European mandate 'Irini'," said the minister on Nov 24 in Berlin. "The fact that there is this debate with the Turkish side shows one of the basic problems with this European mission," added the minister, without going further. German soldiers had to abandon the inspection of the freighter in the Mediterranean after Turkey refused to consent to the inspection. The German Navy acted as part of the EU "Irini" mission to prevent arms deliveries to Libya. Ankara spoke of an "unauthorized" search by the German Navy and, among other things, summoned the EU ambassador. Kramp-Karrenbauer emphasized that Turkey was still an important partner in NATO. "Conversely, you have to ask what would be better if it is not a NATO partner. That would make the situation for us as a whole, especially for neighboring countries like Greece, even more difficult." In joint operations within the framework of NATO missions, Turkey has proven to be an "absolutely reliable partner". Nevertheless, Turkey "presents us with major challenges because it is not only on the road as it is domestically, but also because it has its own agenda that is difficult to reconcile with European issues". Turkey is directly involved in various international conflicts, including in the disputed Caucasus region Nagorno-Karabakh and in Libya. In these cases, Ankara also provides military support to one of the conflicting parties.

The Turkish Foreign Ministry summoned the Italian, German and European ambassadors to Ankara in the morning of Nov 23. The evening before, the German frigate 'Hamburg' had stopped the 'Roseline A' in international waters, approximately 200 kilometres north of the port of Benghazi on Nov 22 at 5.54 p.m., as part of the European operation Irini, which ensures compliance with the ban on transporting arms to Libya decreed by the United Nations. According to Ankara, the Turkish ship stopped in the southwest of the Peloponnese was transporting food and humanitarian material to Misrata. But the search had to be abandoned after Ankara protested and denied permission for the vessel to be probed. Turkey's Foreign Ministry denounced the inspection as "unauthorised and forceful" and said all crewmembers of the freighter were forcibly searched. Deputy Minister Sedat Onel later summoned the Italian ambassador, the German Embassy's Charge d' Affaires as well as the EU's envoy to Turkey to formally protest the incident. Germany has rejected Turkey's complaints and stated that all protocols were followed in the mission, adding that no weapons or illicit materials were found on the ship. The vessel had departed Yarimca on Nov 20. The captain of the freighter had cooperated and shared detailed information about the ship's load and voyage, according to the Turkish Foreign Ministry. The armed German forces boarded the vessel by helicopter and conducted a search which lasted for several hours. "All personnel, including the captain, were searched forcibly, all personnel were gathered and detained in one place, and containers were searched by force, with an armed soldier standing at the captain's head," the Foreign Ministry said in a statement. Turkey says the inspection was carried out without their consent, nor that of the ship's captain, and violated international law. "This intervention, which was initiated upon an ambiguous suspicion and continued until midnight, was terminated only upon the persistent objections of our country. We regret the detention of our ship, which seems to have not violated the arms embargo, from its route for hours under severe weather conditions, and the fact that the personnel were treated as criminals during the inspection. "We protest this act of unauthorized and forceful use," the Ministry stated, adding that they reserve the right to seek compensation for potential damage and losses. Germany has rejected the allegations by Turkey and says that the mission followed all protocols. According to a spokesperson in Berlin, the military had warned the Turkish authorities of their intention to inspect the ship, and in the absence of any objection, proceeded to board after four hours. "If there is no objection within a period of four hours, this is considered as tacit consent. The frigate Hamburg acted in accordance with the instructions of the operation command and along the regulations laid down in the mandate for the operation." The decision to search was taken not by the German military but by the Operation Irini headquarters in Rome, the spokesperson added. Berlin confirmed that the inspection was subsequently cancelled by mission leadership once Ankara vetoed the search, and says the team remained onboard until they could safely return to the frigate. In a further statement, Operation Irini said the inspection was carried out "in accordance with relevant UN Security Council resolutions" and that the mission permitted searches in international waters. "Having received no answer from the flag State, the Master of the ship and its crew assumed a cooperative attitude towards the boarding team. "When the flag State made it clear that it denied the permission to inspect the vessel, Operation IRINI suspended activities". All sides have agreed that no illicit material or arms were found onboard the Roseline A during the brief inspection. Operation Irini also said that all recommended COVID-19 precautions were observed during the inspection. Report with video: https://www.euronews.com/2020/11/23/turkey-blocks-an-eu-mission-inspection-of-a-cargo-vessel-travelling-to-libya