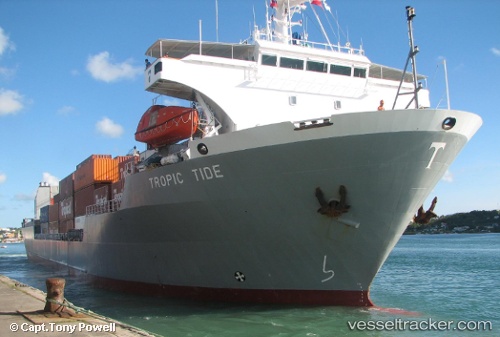 On MAy 15, 2021, around 8.30 a.m. the *Tropic Tide', enroute from Georgetown, while approaching a berth at the port of Paramaribo, was in allision with the 'HMBS Lawrence Major' which was moored alongside a floating dry-dock undergoing maintenance and repairs at the Suriname Drydock and Shipbuilding Shipyard in Paramaribo. The accident was caused by a miscalculation of the turn of the tide in the river bend. Due to the impact, this vessel moved forward hitting a barge in front of it which slammed into another vesse in the area of the Dr. Jules Sedney Haven. Crew members and shipyard workers who were undertaking maintenance repairs at the time were able to safely evacuate the vessel before the collision occurred. Injuries to crewmembers were limited to minor cuts and bruises. The ship’s medic immediately conducted medical assessments. The 'Tropic Tide' suffered damage to the starboard side plating of its bow and remained satationary in port as of May 17. The HMBS 'Lawrence Major' sustained structural damage to its superstructure portside upper deck railing, stairway and bow area. An extensive damage assessment will be done by the Damen Shipyard Group. The investigations into the accident are being conducted by the local Suriname police as the local marine authorities, in collaboration with the owners and shipping agents of the MV Tropic Tide, Suriname Shipyard, Damen Shipyard Group representatives and the insurers of both vessels. Report with video: https://www.waterkant.net/suriname/2021/05/15/video-aanvaring-vrachtschip-bij-sdsm-in-paramaribo/

Antigua St. John's - Industrial unrest at the port has forced cargo vessel 'Tropic Tide', loaded with goods destined for Antigua, to leave the island without off-loading. Manager of Antigua Maritime Services, Frank Schwartz, confirmed that the weekly visit by the Tropical Shipping Lines vessel was affected by the industrial action when all categories of workers downed tools to protest the late payment of September salaries. Sources at the port said the workers declined to work on the vessel to protest the continued late payment, and that action crippled operations at the country’s main seaport. Schwartz said his company handles shipping services for all the main supermarkets on the island, and he suspects that supermarket owners may have a difficult time re-stocking their shelves after the weekend because the ship has been diverted elsewhere. “This action will have serious repercussions, as the supermarkets were expected to be able to access their containers with their goods by midday Monday. Instead, the vessel sailed late in the afternoon with the goods still aboard,” he explained. Read more: http://www.caribarena.com/antigua/news/latest/101858-industrial-action-affects-cargo-vessel.html#ixzz28mbAqglQ