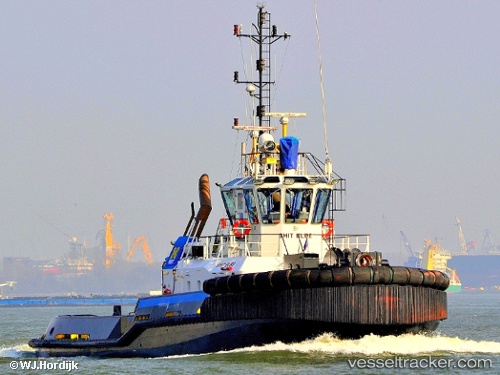 The ASD 2810 tug ‘Smit Elbe’, built in 2007, provides 60 tonnes bollard pull. She went into service in Liverpool on Sunday 14th July 2019. Within the existing fleet of 6 tugs in Liverpool, the Smit Elbe, Smit Donau and Smit Barbados are three sister tugs with the same sailing profile, now operating together in Liverpool.

On Feb 4, 2016, two new windows were installed in the wheelhouse of the "Smit Elbe" in the Waal Port of Rotterdam. They were broken when, during the assistance to a vessel in port, the towing wire broke and smashed through the windows. Photo: http://cdn.tugbase.org/site/wp-content/uploads/2016/02/1.jpg

First tug in the port of Rotterdam fuelled with GTL

The Boskalis vessel the SMIT ELBE in the port of Rotterdam has become the first tugboat in the Netherlands to be fuelled with Shell GTL, the company said in its press release. GTL, which stands for gas-to-liquids, is a liquid fuel made from natural gas converted into synthetic diesel. GTL produces far fewer nitrogen oxide, sulphur dioxide, fine dust particles and black smoke emissions than regular diesel.