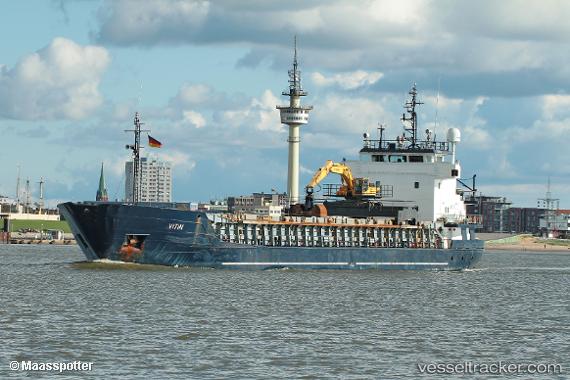 The "Vitin" which ran aground off Tonnes in Lurøy was refloated on May 28 around 3 p.m. with the high tide by the tug "Boa Brage", almost 12 hours after the accident. The ship was then escorted southwards to Sandnessjøen. The plan is to anchor the ship at Holmen, so that the maritime authorities can carry out a more thorough inspection. There was water intrusion in a small ballast tank in the foreship, but the stability was not affected by the flooding. The crew of seven was safe. Norwegian report with photos: https://www.hblad.no/nyheter/sjo/ulykke/lastebat-slept-av-grunn/s/5-23-72276

The MRCC in North Norway was notified about the grounding of the "Vitin" north of Tonnes in Lurøy on May 28, 2017, at 5 a.m. The ship was loaded with fishmeal and got stuck on a sandpit off Leia at Vollvika enroute from Huoy, where she had sailed on May 26 short past midnight, to Myre. The lifeboat "Ruth Opsahl" was alerted and tried to pull the vessel off, but did not have enought power, so the tug "Boa Brage" (IMO: 9551894) had to be called which arrived around midday. No spills nor damage was reported. Norwegian report with photos: https://www.ranablad.no/luroy/kyst/lastebat/lastebat-pa-grunn/s/5-42-279259

On Mar 18, 2016, at 5 p.m. the vehicle carrier "Schelde Highway", while leaving the port of Emden bound to Grimsby, suffered a rudder failure and was in collision with the "Vitin" which was coming from Sandnes and about to enter the port. No one was injured, when the car carrier slammed into the cargo ship's side. The "Schelde Highway" returned to the Ems Quay where she berthed at 6 p.m., the "Vitin" berthed at the Zungen Quay at the same time. While the car carrier had suffered only slight damage and resumed the voyage to Grimsby the same evening, the "Vitin" suffered significant damage at the port side foreship. Report and photos: http://schiffe-emden.de/zwei-unfaelle-auf-der-ems-innerhalb-von-24-stunden/ http://www.shipspotting.com/gallery/photo.php?lid=2427893