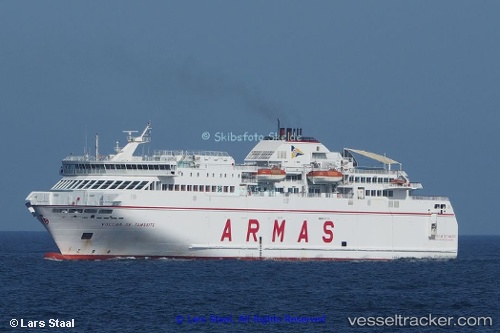 The "Volcán de Tamasite" allided with the ramp 1 of the La Esfinge dock in the Puerto de La Luz in Las Palmas de Gran Canaria on March 9, 2019, around 7 p.m. due to adverse weather conditions. There were no injuries or leaks, but the ferry suffered hull damage. The "Tamasite Volcano" covered the route Morro Jable - Las Palmas de Gran Canaria - Santa Cruz de Tenerife. Passengers registered a rumble. Many of them were in the car decks inside their cars and ready to leave the ship. Vhicles that collided with each other because of the impact and suffered minor damage. The ferry was able to leave with own power and headed towards the bay off the port, where it remained until the arrival of a tug of the Boluda VB Alborán Group for another berthing attempt. This maneuver was carried out at 7.34 p.m. without incidents at the ramp number 5, the farthest to the dam and within the passenger terminal that the company is actually building. Only one passenger reported injuries on one hand, but did not have to be attended despite the mobilization of an ambulance from the Canary Emergency Service (SUC), which upon arrival confirmed that the patient had already left. Passengers who stayed in the capital of Gran Canaria were able to leave and pick up their vehicles. Passengers who continued to the capital of Tenerife were forced to change ships to follow the route because the "Volcán de Tamasite" was inoperative after the accident due to the damage suffered. Naviera Armas then operated the route with the fast-ferry "Volcán de Teno", which set sail at 9.45 p.m., approximately 1,5 hours behind the schedule originally planned. The company said that the accident had been caused by inclement weather of sea and wind. The ferry berthed at the local Astican Shipyard for repairs on March 15 at 11.30 a.m. The "Volcan de Tamasite" sailed from Las Palmas on March 25 at 1.25 p.m. Spanish report with photo: https://www.laprovincia.es/sucesos/2019/03/10/ferri-armas-volcan-tamasite-choca/1154938.html

The "Volcán de Tamasite" which had been drydocked at the Astican Yard in the port of Luz in Las Palmas since Apr 23 to repair the damage suffered at the bow in the allision with the Nelson Mandela pier while leaving port bound to Santa Cruz, had its repairs completed on June 12 and left Las Palmas at 11 p.m., bound to Motril, ETA June 14, 7 p.m. Photos: http://forum.shipspotting.com/index.php/topic,15658.msg83495.html#msg83495

The Investigation Commission for Marine Accidents and Incidents (CIAIM), under the Ministry of Public Works, has opened an investigation to find out the causes that caused the "Volcan De Tamasite" to crash against the Nelson Mandela pier. After a problem in the electrical panel of the rudder was left inoperative for a few minutes when the ship was about to leave the port of Luz in the direction of Tenerife. The investigation will be carried out parallel to the file that has opened by the Maritime Captaincy of Las Palmas after the incident. Regarding the gasoil that spread in the sea much of the 60 tons have disappeared during the weekend thanks to its volatile nature, the heat and the action of the Salvamento Marítimo boats, which prevented a contamination of the coast by mechanical dispersion. The oil spill in the vicinity of the Nelson Mandela pier covered an area of ​​approximately 500 meters. The rescue boat "Salvamar Nunki" controlled the spot in the morning, while the "Guardamar Talia" was monitoring the area of ​​La Garita in case there was any remaining fuel. The airplane Sasemar 103 was launched for a surveillance flight. The anti-pollution operation continued on Apr 25 in order to verify that the dumped oil had totally dissipated. As for the person injured in the accident and who had had to stay over the weekend in a hospital for observation, the man has now been discharged. Spanish report with photos: http://www.laopinion.es/canarias/2017/04/25/fomento-abre-investigacion-impacto-barco/769633.html#