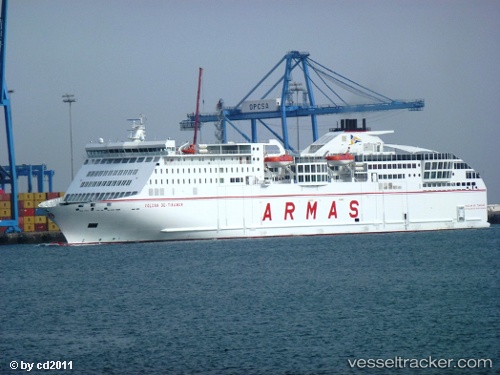 On Feb 20, 2022, Salvamento Marítimo jointly with the ferry rescued 33 migrants who were sailing aboard a boat bound for the Canary Archipelago. They were transferred to the La Cebolla pier in Arrecife. At around 2:45 p.m., the MMRCC in Las Palmas received a notice from the 'Volcán de Tinamar' informing that several passengers had reported having sighted a boat that seemed to be issuing distress signals, so the ship turned back towards the indicated position, about 45 miles from Lanzarote. Around 3:00 p.m., the ship confirmed to have located a small boat. The MRCC asked to escort it until the arrival of the "Salvamar Al Nair', which had already been mobilized and spotted the boat at around 5:45 p.m. It proceeded to rescue the 31 people who were on board, all North Africans and in apparent good health. She headed to the port of La Cebolla, where she arrived around 8:30 p.m.

The ink is not yet dry regarding the approval of Naviera Armas’s takeover of Trasmediterranea, but the first step has been taken with the announcement that Armas has agreed as part of the takeover package, to give up the Motril to Melilla route to new entrant FRS. Shippax understands that the vessel operating this route, the VOLCAN DE TINAMAR, has now been re-assigned to Trasmediterranea’s route between Barcelona and Mahon (Menorca) from 8 June. Source: shippax.se

The Civil Guard located 67 immigrants, 40 of them minors, hiding in tanks and trucks that were going to embark on the "Volcan de Tinamar" in Melilla. The ferry was heading for Motril. Almost half of them, 30 specifically were already inside the ferry when they were found by the Civil Guard, which collaborated with the National Police.