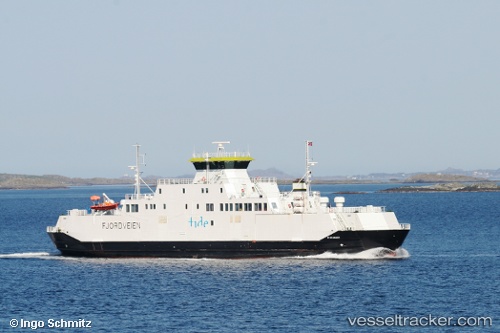 Ferry sidelined due to engine trouble

The "Fjordveien" had to be taken out of the service between Mekjarvik and Kvitsøy due to technical problems in the morning of March 21, 2017. SHe was sidelined in Mekjarvik for troubleshooting. First, the connection was served by speedboat, but late in the night, the ferry "Hamarøy" was called to replace the "Fjordveien". It was not yet known how long it would take to resolve the problems with the main engine, but it may take about a week before the the damage was rectified. The "Stord", which usually is a spare ferry for the route Mekjarvik-Kvitsøy, was actually running between Lauvvik and Oanes since the "Finnøy" was taken out of service due to a scheduled maintenance.

The ferry service between Mekjarvik and Kvitsøy had to be suspended in the morning of Jan 13, 2014, due to technical troubles of the "Fjordveien". An express ferry departed at 10.50 a.m. frmo Mekjarvik and followed the published timetables. During the repairs on the ferry delays were not ruled out.

The Skipper of a burning sailboat was saved by the crew of the "Fjordveien" on Aug 25, 2013, on the Boknafjord at 1.30 p.m. The man had to jump into the sea after having sent out mayday message on radio which was quickly caught up. The ferry, which was on the way to Skudesneshavn, turned around and headed towards the casualty.The ferry launched a rescue boat and picked up the boat operator. The sail boat would probably sink. The ferry was about 40 minutes late due to the operation. Norwegian report with photo and video: http://www.h-avis.no/nyheter/matte-hoppe-pa-sjoen-1.8035438