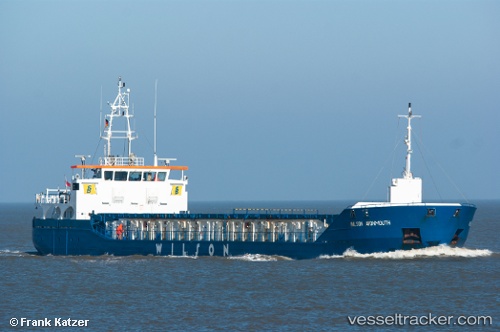 The "Wilson Avonmouth" en route from Ymuiden to Bilbao, carrying 3292 metric tonnes of steel coils, with seven crew members on board, went adrift following an engine failure in position 051 09 36 N, 004 28 54 W, six miles east of Lundy island, on Nov 2, 2018, att 8.30 a.m. A filter replacement in the main engine was being carried out seven miles west-northwest of Morte Point. The engine failure is still under investigation. Duty Counter Pollution and Salvage Officers (DCPSO) have been informed. At noon the engine repairs have been effected, and the vessel resumed its passage at 12.35 p.m.

The "Wilson Avonmouth" entered the port of Celeiro (Viveiro) already on Jan 1, 2018, to secure part of the twenty-ton steel coils bound from Newport, UK, to Gemlik. The ship had encountered a storm in which part of the cargo shifted. Though the ship was not heeling, it was decided to seek shelter as the shift could have influenced the stability of the rest of the cargo in adverse conditions. After two days anchored off San Román at the mouth of the Viveiro estuary, the "Wilson Avonmouth" entered the commercial dock of Celeiro on Jan 4. A large crane was hired to get the steel coils repositioned, but diverse circumstances prevented it. On Jan 7 the ship returned to the anchorage off San Román to give quay space in Celeiro for another merchant ship which was scheduled to load quartz. After concluding that operation, the "Wilson Avonmouth" returned to port in the night of Jan 8. On Jan 9, a crane returned to try to secure the cargo. With forecasts of another storm on Jan 10 and 11 the ship left only on Jan 16 to Gemlik. She entered the port on Jan 25 at 11.40 p.m. and sailed again on Jan 26 at 7.40 p.m., bound to Gebze, where she arrived on Jan 30 at 6.30 a.m. and docked at the Kroman Çelik Sanayii A.Ş. https://www.lavozdegalicia.es/noticia/amarina/2018/01/10/mercante-trata-asegurar-celeiro-parte-carga-movieron-temporales/0003_201801X10C5991.htm?utm_source=facebook&%3Butm_medium=referral&%3Butm_campaign=fbmar

A Ukrainian crew member in the 30s aboard the "Wilson Avon" fell 1,5 meters deep into a cargo hold and landed on a handle off Yara on Mar 20, 2016. The police officials in Telemark were notfied at 12:30 a.m. about the accident on the freighter that was anchored at Herøya in Porsgrunn. The man was seriously injured and was taken by air ambulance to hospital around 2 p.m. The ship berthed in Porsgrunn at 7.45 p.m. Norwegian reports with photos: http://www.nrk.no/nyheter/mann-skadet-i-arbeidsulykke-1.12864365 http://www.ta.no/arbeidsulykker/heroya/yara/mann-har-falt-ned-pa-et-staldekk-i-arbeidsulykke/s/5-50-194303 http://www.varden.no/nyheter/mann-hentet-med-helikopter-fra-lastebat-etter-fall-1.1512259 http://www.pd.no/lokale-nyheter/heroya/industri/mann-floyet-til-sykehus-etter-ulykke-pa-skip/s/5-40-86055