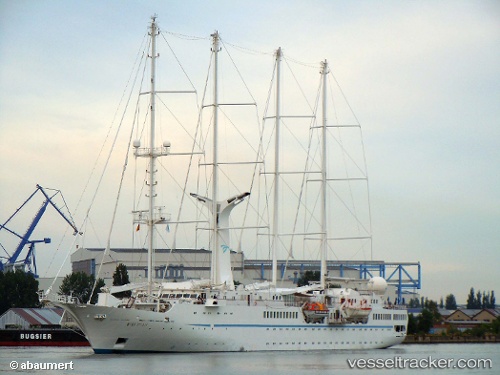 The "Wind Spirit" struck the Uturoa wharf in Raiatea in the morning of June 1, 2019, due to an engine failure when backing up to dock. The vessel dropped its two bow anchors, after all three engines failed, but the stern crashed in one of the sailboats at the Shell station. A catamaran of the charter company Dream Yatch which was hit at port side was seriously damaged in the incident. No injuries were reported, and the "Wind Spirit" escaped unscathed. French reports with photo and video: https://www.tntv.pf/Raiatea-le-navire-Wind-Spirit-heurte-le-quai-de-Uturoa_a32480.html http://www.ladepeche.pf/wind-spirit-a-heurte-quai-samedi-matin-a-uturoa/

With the completion of Wind Spirit’s drydock on Dec. 22, Windstar Cruises’ $18m fleetwide renovation is finished. The project, which began in December 2011, encompassed all three sailing yachts in a stem-to-stern renovation that enhanced public spaces, dining venues, staterooms and suites, and even replaced the sails. The 148-passenger Wind Spirit, the last to undergo refurbishment, was updated with new furnishings, upholstery, art, lighting, wall coverings, carpeting, ceiling finishes, window treatments and floor coverings during the month-long renovation. The design palette, consistent with the other two yachts, combines sand and marine colors that contrast with the wood finishes.