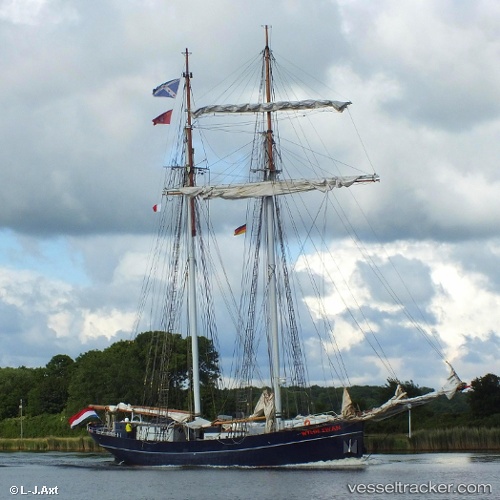 On April 24 the ‘Wylde Swan‘ was expected back in Harlingen at the end of an unplanned voyage across the Atlantic. Aboard the STS wree 25 Dutch pupils, aged 14-17, who had started with an aircraft in Amsterdam at the beginning of March for a six week long Caribic trip guied by the Masterskip organisatnon from Sint Maarten to Cuba where the return flight was planned. As the corona virus spread, more and more ports closed their ports, so that the voyage became impossible as well as return flights home. To stay in Sint Marten was no option either due to the weak health care system. So the only option for the pupils along with four teachers and a crw of 12 was to return aboard the STS across the Atlantic. , a voyage of about 4.500 nautical miles. On April 8 the vessel berthed in Horta, and on April 21 an engine damage caused an interruption three miles SE of Chesil Beach, Dorset. After a repair of about six hours the anchor was weighed again, and the ship was now on its last leg.

A Coast Guard Air Station Borinquen MH-65 Dolphin helicopter crew conducted the medical evacuation of a 16-year-old girl from the "Wylde Swan" in the morning of Mar 17, 2014, approximately 85 nautical miles east of Saint Thomas, U.S. Virgin Islands. Rescued was a Dutch citizen, who suffered medical complications while onboard the sailing trainee vessel, which required the patient to receive immediate medical attention ashore.Coast Guard Sector San Juan Command Center watchstanders received a request for assistance from the crew of the Wylde Swan at approximately 10:30 p.m. on Mar 16 and dispatched a MH-65 Dolphin helicopter from Coast Guard Air Station Borinquen, which was currently patrolling in the vicinity of the U.S. Virgin Islands, to perform the medevac. The helicopter and aircrew arrived on scene and deployed their rescue swimmer to the sailing vessel to assess the patient’s condition. The patient was placed in the helicopter’s rescue basket and hoisted aboard the aircraft as was the "Wylde Swan"’s nurse immediately thereafter. The Coast Guard helicopter crew transferred the patient to emergency medical services personnel at the Saint Thomas, U.S. Virgin Island’s Airport for transport to the Schneider Regional Medical Center to receive further medical care.

On July 14 at noon the body of the deceased Dutch engineer Koen Van Gogh of the "Wylde Swan" was found inside the sunken "Wyvern". The deceased was recovered by a ROV of the patrol boat "Triton - KBV 002". The Swedish Coast Guard will had over the body to the Swedish police. The boat of the Swedish Coast Guard had localized the "Wyvern" wreck on July 13 at 4.30 p.m. at a depth of 50 to 55 meters. Swedish report with photos: http://www.kustbevakningen.se/sv/granslos-samverkan/nyhetsarkiv/saknad-seglare-hittad/