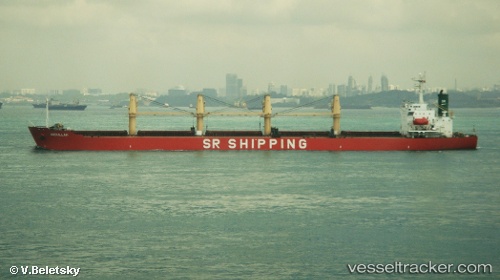 On Sep 9, 2013, around midnight the "Abdullah" collided with the Panama flagged "Fortuna Cloud" at Chittagong Port’s outer anchorage. The engine room of one of the ships started to take in water following the collision at Alpha Anchorage. The "Abdullah" ruptured the bottom of the "Fortune Cloud" which got stuck on the sea bed, while the "Abdullah" also suffered significant damage. The crews however were safe and the accident was not disrupting navigation on the port’s channel. A tug and a Navy ship were involved in the rescue operation.

Findings regarding drift in Coral Sea released by ATSB

The Australian Transport Safety Bureau on Aug 23, 2013, released its findings on the breakdown and subsequent drift towards danger of the bulk carrier "ID Integrity", which is actually running as "Abdullah", in the Coral Sea from May 18 to 23, 2012. While transiting the Coral Sea, the main engine shut down when its fuel pump reversing mechanism came free and jammed. This caused the camshaft to bend and slip in a drive coupling which resulted in the camshaft being out of timing and therefore the engine could not be restarted. The ship drifted in a westerly direction towards the Australian coast and the Great Barrier Reef. During the afternoon of May 19, the ship passed over Shark Reef, located about 60 miles east of the Great Barrier Reef Marine Park, without incident. The following day, the ship was taken in tow when it was about 35 miles to the east of the marine park and towed to Cairns for repairs. The ATSB found that the engine manufacturer had identified the need for owners and operators to check the fuel pump reversing mechanism for cracks and secureness and provided this advice in service letters. However, on board the ship, this advice had not been included in the engine manuals or planned maintenance system. As a result, over time and despite regular inspections, the system deteriorated and cracks developed in the mechanism undetected. This led to the failure of a fuel pump reversing link on May 18. The investigation also found that, once notified, the actions of the various stakeholders were appropriate and the response arrangements were effective. The vessel’s managers have implemented a schedule to inspect all main engines in their fleet and undertake repairs as necessary. Staff from all company ships have been made aware of this incident and it has been included in crew training centre courses. MAN B&W, the main engine designer, reiterated the need to include all service letter advice in manuals and maintenance systems. They also advised that service letters and updated manuals are always available on request. The ship’s classification society, ClassNK, initiated discussions with MAN B&W to enhance its knowledge of engine design and operation changes. ClassNK also improved the content and extent of information provided to its surveyors. Service advice from machinery manufacturers needs to be carefully assessed and implemented as necessary as part of a ship’s planned maintenance system. Furthermore, all associated documentation should be updated and regularly checked to ensure it remains relevant and reflects the latest available information.

The owners of the "ID Integrity" which is still anchored off Cairns have not yet made decisions about where it will be repaired. Engineers have identified the damage to the engine and investigations were continuing. it was not yet known how long the assessment would take.