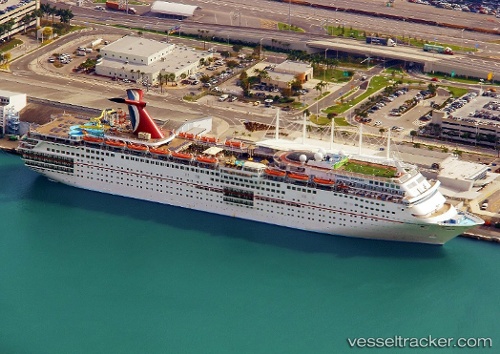 Pair of cruise ships sold to breakers in Aliaga

The Carnival Corporation has sold the 'Carnival Sensation' and 'Carnival Ecstasy', which were earmarked for disposal at the beginning of Feb 2022, to a Turkish, European Union-approved recycling facility. Breakers at Aliaga are offering between $350 and $380 per ldt for cruise tonnage on a delivered basis, which would equate to a price in the region of $11m for the 'Carnival Sensation'. Carnival has a strict policy of only selling directly to EU-approved green recycling facilities, even though Turkish scrap prices are substantially lower than the $585 per ldt that Pakistani breakers have been offering for cruise tonnage over the past two months. The ships had been in warm lay-up since the onset of the corona pandemic.

On Nov 19, 2020, the 'Carnival Ecstasy' responded to an emergency call from the yacht 'Balista' off the Bahamas coast. A 29-year old crew member had suffered severe injuries. With the vessel close to the boat, Captain Domenico Calise and the crew of the 'Carnival Ecstasy' were quick to take action and perform a rescue operation. Even though the ship had suspended operations due to the pandemic, Captain Domenico Calise and the ship’s crew immediately responded. With 30-knot winds, it took a complex operation to bring the severely injured 29-year old crew member onboard the ship and towards the vessel’s hospital. After initial treatment onboard the Fantasy-class ship, the person was evacuated by a U.S. Coast Guard helicopter for medical care ashore. The COVID-19 protocols made the rescue operation even more difficult. The operation prompted the Association for Rescue at Sea (AFRAS) to honour the Captain and crew of the 'Carnival Ecstasy' at this year’s annual ceremony on Capitol Hill on Nov 2, 2021. It is recognition for the work and care that crew members and officers onboard ships have towards each other in a line of work that still has its risks. Report with photos: https://www.cruisehive.com/carnival-ecstasy-captain-and-crew-receive-recognition-for-rescue-operation/59144

The 'Carnival Ecstasy' responded to a mayday call from the private yacht 'Balista' with a crew member suffering from severe injuries. At the time the mayday was picked up, the vessel was anchored in the Bahamas and just four nautical miles away from the yacht. Captain Domenico Calise immediately responded even though there was a vessel that was closer which did not seem to be responding to the mayday. The captain notified all the relevant authorities including the U.S. Coast Guard. It was not a straight forward rescue operation due to 30-knot winds at the time. The 29-year-old injured male crew member on the yacht could not be transferred to the cruise ship immediately as it was a complex operation. The initial transfer needed to be aborted but he was eventually brought aboard the vessel via its rescue boat. The injured was evaluated and treated by the medical team. He did need further treatment on land so as a result, the cruise ship headed north to meet a U.S. Coast Guard helicopter for urgent medical evacuation. He was now receiving the much-needed care at a medical facility on land.