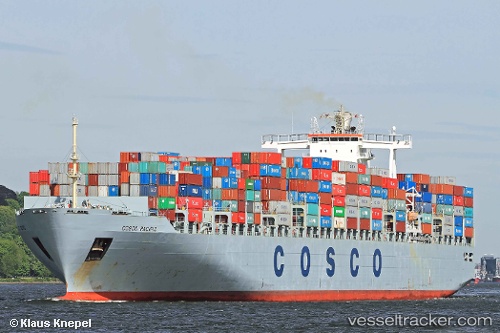 Containers with batteries on fire were falsely declared as spare parts

The fire aboard the 'COSCO Pacific' on Jan 4 had started in a container loaded with lithium batteries, falsely declared as spare parts. It was caused by the spontaneous combustion of a lithium ion battery. At least two containers were destroyed by the fire, and neighbouring containers were damaged. The extent of damages and number of damaged containers was yet unreported. The burnt containers were operated by Wan Hai Lines. They were loaded in Nansha and bound for Nhava Sheva. In the morning of Jan 9, the container ship was stationary at Colombo. All burnt and damaged containers had been offloaded and the containers around the fire site were still under monitoring. Fire safety checks were under way. The vessel shifted to Colombo anchorage on Jan 9 at 3 p.m. She dropped anchor in pos. 07° 2.64' N 079° 45.28' E.

Fire in cargo in Arabian Sea

En route from Port Klang to the Jawaharlal Nehru Port (JNPT), a fire broke out in a container in a cargo hold of the 'Cosco Pacific' on Jan 4, 2020, off the southwestern Indian coast. The fire was controlled by the ship’s crew by use of CO2 suppressant, but the vessel was forced to make an emergency call at the port of Colombo where it berted at the Eastern Ferry Terminal on Jan 6 at 6.50 a.m. The containers on fire were to be offloaded there. The ship was to be under constant monitoring until the response inspections have been completed. The ship’s original port calling schedule after Port Klang, where it had sailed on Jan 3, was Nhava Sheva, Shekou, Ningbo and Shanghai.

Dense fog interrupted the voyage of the container m/v "Hanjin Bilbao", 115776 gt (IMO: 9355551 ) in the night of Feb 21, 2010. The ship at that time was being underway to Antwerp, but visibility on the Westerscheldt was that bad that the captian could neither see the stern or bow of his ship. The passage of the extremely narrow Deurganckdock in Antwerp seemed too risky thus, and it was decided to stop the ship which was guided to a safe spot at Wielingen-South, near Groede. To prevent that the ship would go adrift and run aground, a tug was precautiously called to keep it on position. Only on Feb 21 at 3 p.m. the ship was able to continue with the high tide after it was turned around by the tug.