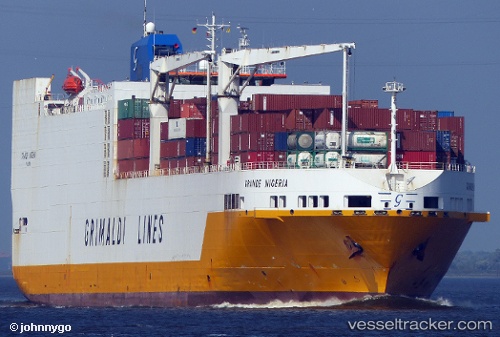 More than 200 kilos of drugs found

In the morning of Feb 11, 2022, the National Customs Directorate and the Navy found more than 200 kilos of drugs inside two vehicles aboard the "Grande Nigeria", which had arrived at the port of Montevideo from Paranagua. The ship was transporting containers and vehicles and upon arrival at the port of Montevideo it was inspected, an operation in which the drug shipment was found. The Montevideo Narcotics Attorney, Mónica Ferrero, the Minister of National Defense, Javier García, and the National Naval Prefect, Rear Admiral José Luis Elizondo, were present at the scene.

120 kilograms of cocaine packed in four bags were aboard the ventilation system of the 'Grande Nigeria' on Jan 28, 2020. The drugs were hidden in the ventilation system compartments of the vessel, A team from the Mixed Container and Vessel Control Unit (Umcc) of the Customs Subdivision of the Dakar Autonomous Port, assisted by personnel of the Scientific Police and the Central Office for the Suppression of Illicit Traffic narcotics (Ocrtis), investigated and searched the ship. The packaging, the brands and identifiers on the newly seized wafers were different from those on the wafers that were the subject of different seizures in 2019. The crew members were being questioned and the investigation followed its course in connection with the Prosecutor's office. Custom officers were tipped off on drugs contraband by an informant. The ship had arrived at Dakar of Jan 24, coming from Brazil. It already had been involved in two cases of drug trafficking, the latest having been also in Dakar in June 2019, another one was in Santos in 2018.

Senegalese Customs officers announced record cocaine bust on Jun 30, after they found 750 kilo of pure cocaine hidden in 15 Renault brand new cars, on board of Grimaldi’s ro-ro GRANDE NIGERIA in Dakar, Senegal. The ship arrived at Dakar on Jun 24 from Paranagua Brazil. 4 cars with cocaine bags hidden inside were bound for Hamburg, 11 for Tema Ghana.