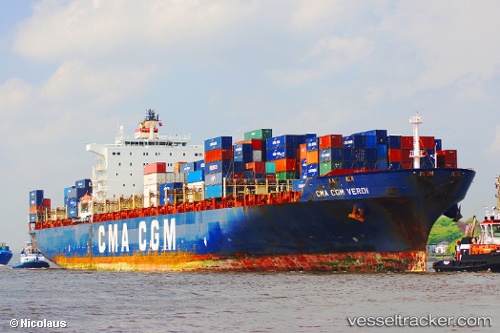 for an undisclosed price to U.A.E based Simatech Shipping

More than 400 people were feared dead in the latest tragedy in the sea off Malta on Sep 15, 2014. Three of 11 migrants pulled out alive from an area some 300 off Malta were airlifted to Malta and transferred to the Mater Dei Hospital. They arrivals said they were Palestinian and had left from Egypt. Two bodies, including that of a young girl, arrived at Freeport onboard the "CMA CGM Verdi" just before 6 p.m. The other eight were sent to Greece. Rescuers were told that two boats carrying migrants were involved in the accident The larger boat appeared to have been carrying between 300 and 400 people, while the smaller one was carrying about 30 immigrants. Some on the smaller boat, which could have been taking in water, were trying to get the bigger boat to stop before they eventually rammed it, causing both vessels to sink.

CMA CGM SA, the world’s third- largest container line, said it’s selling two so-called post- panamax vessels, Bloomberg reports. The ships are the CMA CGM Wagner and the CMA CGM Verdi, the Marseille, France-based company confirmed by e-mail today. CMA CGM declined to say whether it had reached agreement on or finalized a sale. Both vessels, built in 2004, were sold for $45 million to undisclosed Greek interests, Clarkson Research Services Ltd., a unit of the world’s biggest shipbroker, reported Nov. 19. CMA CGM sold 25 vessels between March 2010 and Nov. 18 of this year for $627 million, according to London-based Seasure Shipping Ltd. Seasure publishes VesselsValue.com, an assessor and tracker of sales and purchases of container ships, tankers and dry-bulk vessels.