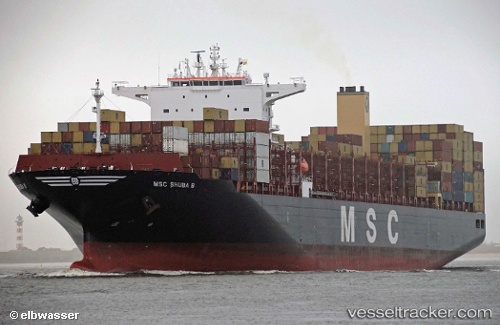 On March 24, 2018, at 9.30 a.m. the container ship "Laura Maersk" was in collision with the "MSC Shuba B" in the port of Callao while manoevering off quay 5 of the APM Terminals. Despite attempts of the tugs to avoid the Maersk-ship slamming into the starboard side of the MSC-vessel, it hit the stern, causing minor damage. The "Laura Maersk" left the port again on March 25 at 7.40 a.m., the "MSC Shuba B" followed at 11 a.m., bound to San Antonio, Chile, with an ETA as of March 28. Spanish report with video: https://portalportuario.cl/video-un-portacontenedores-de-maersk-colisiona-a-uno-de-la-msc-en-puerto-del-callao/

M/V MSC SHUBA B arrived from the West Coast of South America with a cargo of predominately perishable fruit. The origin of most of the cargo was from Chile and Peru, which included table grapes, peaches, plums, pears and blueberries, the company said in its press release. “This size of vessel is increasingly being used as the workhorse for shipping lines around the world. It’s the reason why we are working so hard to make the necessary capital improvements which we have planned as quickly as possible.” PhilaPort is currently implementing a $300 million infrastructure improvement plan which includes wharf strengthening, new cranes, paving and many other terminal improvements. In 2017, the Port realized 19 percent growth in its containerized cargo volumes handling 548,000 containers

Seaspan Corporation (NYSE: SSW) announced today that it has accepted delivery of the MSC Shuba B, an 11000 TEU containership that will commence a seventeen-year fixed-rate bareboat charter with Mediterranean Shipping Company S.A. (“MSC”). Upon completion of the bareboat charter period, MSC is obligated to purchase the vessel for a pre-determined amount. The MSC Shuba B, which was constructed at HHIC-PHIL INC., is Seaspan’s first 11000 TEU SAVER design containership in a series of five ships, all of which are signed to bareboat agreements with MSC.