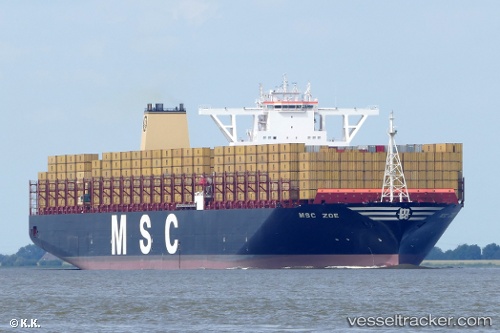 The German Safety Board has completed its investigation into the large-scale cargo loss from the 'MSC Zoe' off the Wadden Islands, on Jan 2, 2019. As a follow-on to the casualty investigation, the board also reviewed the general risks for container ships along the busy shipping routes in the area. The tank testing showed that with the heavy beam seas experienced by 'MSC Zoe' on that night, modern ultra-large boxships can experience severe rolling motions. Those motions result in large acceleration forces on container lashing systems, raising the risk of cargo loss. In shallow water, with the right North Sea wave height and wave period, these ships may even experience bottom contact if a "large downward heave movement coincides with a large roll motion at that same moment. The board found out that, ?The potential occurrence of extreme ship motions relates to the fact that container ships have gradually become larger and wider, and sail with high stability. The natural roll period of these ships closely approximates the wave period that can prevail on the North Sea. In the event of beam seas with a wave period close to the natural roll period of a ship, as a consequence of resonance, the ship responds significantly to the waves, resulting in violent rolling motions,". These phenomena are particularly risky in the traffic separation scheme off the Wadden Islands, according to the board. The investigation indicates that both lanes of the TSS - especially the shallower southern lane have an elevated risk of failed lashing systems and container loss for ULCVs in a storm-force north-westerly wind. Full report: https://www.bsu-bund.de/SharedDocs/pdf/DE/Unfallberichte/2020/Gemeinsamer_Untersuchungsbericht_MSC_ZOE.pdf?__blob=publicationFile&v=2

On Jan 1 the crew of the 'MSC Zoe' discovered that containers fell over board. This is stated in the interim report of the German Sea Accident Investigation Board (BSU). Until now it was always unclear when the container loss was noticed. The batch of containers that first fell over oard ended up largely above Terschelling and Vlieland. The report does not show that the problems on Dutch territory have been reported to the Dutch Coast Guard. According to the investigators it was about 11 p.m. when the havoc was noticed in the wheelhouse. The weather was tough with a north-northwest wind of force 8 to 10 and waves of 5.5 meters which made the ship roll 10 to 15 degrees to both sides. The crew, of 22 people assessed the damage and after midnight the voyage to Bremerhaven was continued. At 12.30 a.m. the ship's management maed contact with the German Traffic Center German Bight Traffic (VTS) when the ship which was near the German Wadden island of Borkum started rolling again and once more lost containers. This time the mate turned the ship's bow into the wind. The voyage resumed at t2 a.m., this time without problems. The report states that of the 8.062 containers, in total 1047 were damaged; 324 fell overboard, 45 of them in German waters. No details were reported about the Voice Data Recorder apart from the statement that the investigators had received all the required information from the data recorder. Exhaustive material has been secured, including interviews with the crew, logs, the lashing program, the stow plan, stability data and photos of the damage. The ship's management cooperated well. The interim report was issued because the final report will appear more than one year after the accident. In that case, a European directive requires researchers to report a small number of claims. The interim report dodid es not mention anything about the possible impact of a contact with the sea bottom. According to the investiators, the ship reached a depth of 12.4 meters so it may have hit the ground which was contradicted by the shipping company MSC. The effects of sailing in relatively shallow water is one of the issues that the BSU wants to deepen. The final report will probably follow next spring.

About 11 months after the accident of the 'MSC Zoe' on Jan 2 with a loss of more than 340 containers, the salvage work along the German coast was officially terminated on Nov 11. All safety relevant debris has been removed from teh fairways, and the waters along the German Northsea coast and the Ems could be safely navigated now thanks to the collaboration of the German and Dutch authorites. With state of the art sonar technology the bottom was surveyed thoroughly by the sounding ship 'Paapsand'. covering an area of 770 square kilometers, and analyzed thereupon. Not all debris could be tracked as almost all containers were destroyed when falling over board and lost cargo was spread in such small parts that not all could be traced and recovered accoringly. The recovery work in the Netherlands were continued in an area of 3.000 square kilometers. Whether a bottom touch had caused the accident was still unclear and being investigated by the Federal Board for Ship Accident Investigation in Hamburg. The final results from all countries involved were expected only in 2020.