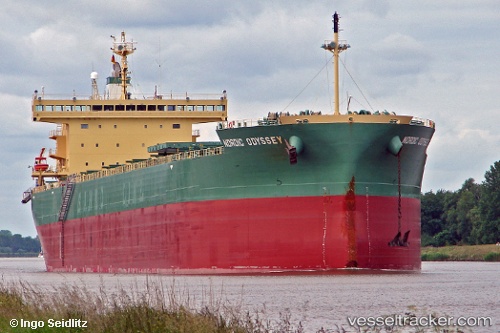 The "Nordic Odyssey" ran aground during the departure from the port of Liepaja on Oct 2, at 7 p.m. The ship was partly loaded with grain. On Oct 3 it was still at Anchorage Lima 3. It left only one week later and resumed the voyage to Gibraltar, ETA Oct 20. Photo: http://www.shipspotting.com/gallery/photo.php?lid=2543907

On Aug. 30, its Sanko Odyssey, the world's biggest ice-classed bulk carrier, set out from the Russian port of Murmansk along the Northern Sea Route to arrive in China on Sept. 23 after 23 days at sea, which according to Bonfils is 22 days less than sailing through the Suez Canal, MSNBC reports. It was the second voyage by a commercial bulk carrier through the icy sea lane. Depending on the particular ports of a route, the distance to China is roughly 30 percent shorter. The ship was carrying 70,000 tons of iron ore concentrate and was escorted by a Russian icebreaker through the Arctic. It arrived at the Chinese port of Jingtang. More to read at http://www.msnbc.msn.com/id/44706819/ns/us_news-environment/

The "Sanko Odyssey" set off on August 31, 2011, in her maiden voyage along the Northern Sea Route bound for Asia-Pacific region. The bulker will be escorted by the enterprise’s icebreakers. The "Sanko Odyssey", carrying on board 70,000 tons of iron ore concentrate, produced by Kovdor ODPE "Eurochem", is the largest dry cargo vessel, which ever sailed on the northern shipping lane.