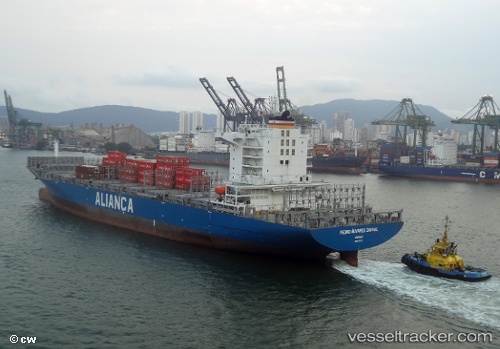 The Brazilian National Health Surveillance Agency (ANVISA) put the 'Pedro Alvares Cabral' under quarantine on May 29, 2020, upon the arrival at Santos. A quick test detected one of the 21 crew members positive for tne COVID-19 virus. On May 31, ANVISA collected samples from all 21 crew members for laboratory analysis. The vessel remained in quarantine for 14 days and has been prohibited from operating until the end of next week.

25 April 2014 | Hamburg Süd subsidiary Aliança christened its container ship “Pedro Álvares Cabral” during a ceremony held for customers at the port of Itapoá. The ship’s Sponsor is Elisabeth von Krüger de Freitas, the wife of Humberto Ramos de Freitas, Executive Officer for Logistics and Mineral Exploration of Vale S.A., one of the most important clients of Aliança Bulk. Dr. Arnt Vespermann, Member of the Executive Board of Hamburg Süd and Julian Thomas, General Manager Region South America East Coast of Hamburg Süd and Aliança, also participated in the ceremonies. The “Pedro Álvares Cabral” is one of four identical 3,800 TEU ships by which Aliança is modernising and expanding its cabotage fleet. Her three sister ships were christened during the course of last year at Pecém, Manaus and Santos. The ships not only set new standards as regards capacity in cabotage services, but also in terms of the environment. All ships carry the names of important South American explorers. The “Pedro Álvares Cabral” was named after the famous Portuguese mariner who discovered Brazil on 22 April 1500.