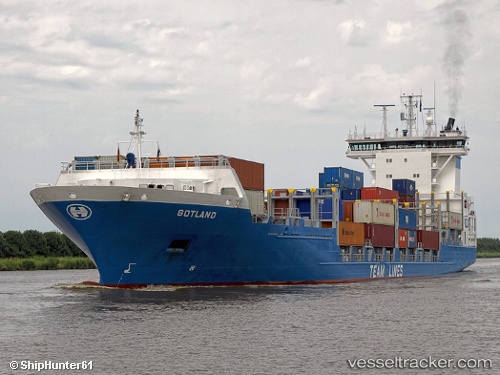 On Sep 12, 2018, around 6 a.m. the bulkcarrier "Gundem Makbule" (IMO-No.: 9520388), enroute from Sceczein to Kalamaki, allided with the´"Tina", which was underway from Gdynia to Hamburg, upon leaving the New Northern lock of the Kiel Canal in Brunsbüttel towards the Elbe. When the ship contacted the berthed “Tina”, both ships suffered scratches at their starboard foreships. The “Gundem Makbule” also suffered dents at the poop deck at port side, and a position lantern was damaged. As all damages were above the water line, the vessels were allowed to continue their respective voyages in the morning hours. The “Tina” continued to Hamburg at 7.15 a.m. and berthed at the container terminal Altenwerder at 11.30 a.m. The “Gundem Makbule” was expected in Kalamaki on Sep 22.

Tina left out call at Bremerhaven after grounding in Kiel

The "Tina" changed its destination from Bremerhaven to Hamburg after its grounding at a jetty of the lock island in Kiel-Holtenau and berthed at the Athabaska Quay in Hamburg on Feb 29 at 6.45 a.m. After cargo opeartions she left Hamburg again on Mar 1 at 3.30 p.m. and headed to Stockholm as next port of call, ETA Mar 3. The ship had suffered scratches and dents when hitting the jetty off the northern locks in Kiel on Feb 28. Photos: http://www.forum-schiff.de/phpBB3/viewtopic.php?f=2&t=23#p123768

Grounding off the Kiel Canal locks in Holtenau