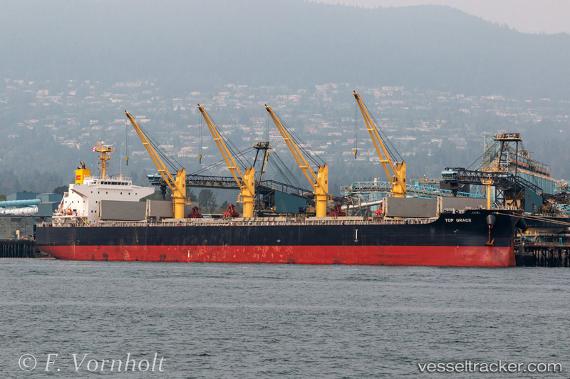 The 'Top Grace' has been released, according to the South African Maritime Safety Authority (SAMSA), as of April 23. The captain and the crew of the ship have pleaded guilty before the Durban Magistrates Court to the attempted murder of two stowaways in late March. The court sentenced the captain to a total of 5 years and three months of prison or R 160,000 fine ($ 8.449) for the attempt of murder and failing to report stowaways. The sentence was suspended for five years under the condition that he is not convicted of the same offense during the suspension. Each of the six crew members, all of Chinese nationality, were fined R50,000 ($2,640) and have paid their fines. The release took place as any further detentio of the ship would be unwarranted except for the payment of a detention fine. The fine was paid on April 23, and the detention of the vessel was immediately lifted. The ship rameined moored at Rochards Bay Anchorage as of April 27.

Two Tanzanian stowaways who escaped death by the skin of their teeth after they were thrown into the Indian Ocean by the crew of the 'Top Grace' and were then washed ashore off the KwaZulu-Natal’s north coast, were set to appear in court for contravening the Immigration Act, while the seven Chinese nationals responsible for ejecting the two pleaded guilty to attempted murder when they appeared before Durban Regional Court Magistrate Garth Davis. Tthe seven claimed they had set sail for Durban from Singapore on March 26 before discovering the stowaways aboard the next day. They asked the stowaways to wear face masks due to concerns of the coronavirus pandemic but they refused. The Chinese further claimed that they separated the Tanzanians and gave them food and water and then built a raft from empty plastic drums and plywood and gave life-jackets and water and asked them to leave the ship on the raft. After disembarking from the vessel, the stowaways were eventually washed ashore at Zinkwazi Beach near KwaDukuza. The vessel’s master, Cui Rongli, who also pleaded guilty for failing to report the stowaways, which is a contravention of the Merchant Shipping Act, was handed an R100 000 fine or four years imprisonment.

The captain and crew of the 'Top Grace' pleaded guilty to attempted murder after throwing two stowaways into the Indian Ocean, off the South African coastline to avoid catching coronavirus from them. Captain Cui Rongli watched as his crew built a makeshift raft roping together sealed plastic drums and plywood, then stopped his ship to dump the petrified pair overboard. Amiri Salamu, 20 and Hassani Rajabu, 30, were given just a life jacket and two bottles of water each and told which way to paddle with their hands to reach the nearest land. With no food to eat and at the mercy of the wind and sea currents they were cast adrift on the high seas fearing being swamped by the waves or their raft falling apart at any moment. Three days and two nights later the Tanzanian stowaways were washed up exhausted onto a tourist beach at dusk on the KwaZulu-Natal coast about 50 miles north of Durban. They had drifted through one of the most shark-infested areas of the North Coast, near the Tugela River mouth frequented by Great Whites, Hammerheads, Tiger and Bull Sharks. hey had been buffeted by strong winds but kind sea currents had carried their raft to the safety of Zinkwazi Beach, although they had to swim the last stretch over a rocky reef. Shocked locals saw the pair wading through the surf; and paramedics said they were suffering from hypothermia, thirst and hunger… having been given no food and little water to survive. When the South African Maritime Safety Agency received news of the stowaways being abandoned to their fate in the Indian Ocean they contacted the bulk carrier by radio. The castaways had remembered the name of the ship and that the crew were “Chinese looking”. The ship was impounded when it docked at Richards Bay where a police launch took officers on board who arrested the ship’s captain. The Chinese skipper and the six crew members Lin Xinyong, Zou Yongxian, Tan Yian, Xie Wenbin, Xu Kun and Mu Yong all admitted attempted murder at Durban Magistrates Court on April 17. The Master of the ship was fined £4,350 and each of the crewmen £2,175 in a plea bargain agreement which was ratified by the magistrate Garth Davis. Captain Rongli was fined a further £2,175 for misconduct and £435 for not reporting the stowaways. He was told he would be sent to prison for four years if he did not pay up. Prosecutor Vishalan Moodley said the seven men pleaded guilty in terms of “dolus eventualis” in that they knew there was a possibility the stowaways might die or perish at sea. The court heard the bulk carrier arrived at Durban harbour from Singapore and while at anchor the two Tanzanian’s climbed the anchor chain and stowed away. The ship sailed on March 26 and the following day when 25 miles out to sea to the two stowaways “popped up” on the main deck. The magistrate heard that the stowaways refused to give their nationality but were given food and water and isolated in a room while the crew worked out what to do. National Police Authority spokesperson Natasha Cara said: “The accused were wary of the men and asked them to wear face masks in light of the Covid-19 pandemic. The men refused to wear the face masks so were put in a separate room as their Covid-19 status was unknown and there was a fear by the crew about the virus." The court was told the following day a decision was taken to throw them off the ship and the crew built a makeshift raft made out of plastic drums and plywood and rope. The vessel sailed to within three nautical miles off the South African coast and lowered the pair by ladder into the flimsy raft rocking in the seas 60 feet below. They provided the men with life jackets and the crew acted in a threatening manner banging the vessel’s decks as they descended into the raft. “The ship pulled away leaving them once they were on board the raft. The accused admitted that their actions could have resulted in serious injury and even the loss of life". Defence advocate Willie Lombard said in mitigation Salumu and Rajabu had been given life jackets and water and could see land when cast adrift and suffered no external injuries. “There were many mitigating factors and if the crew had wanted to be cruel they could have dropped them in the high seas much further out without life jackets”. The stowaways have been detained by the South African immigration authorities and are awaiting the results of Covid-19 tests and still face possible criminal charges. It was believed the Chinese captain and crew have paid their fines and were free to sail back to China having arrived in Durban last month with a full cargo from Singapore. Under Maritime Law any stowaways must not be mistreated and must be landed at the next port of call and the shipping company is responsible for all the costs of repatriation.