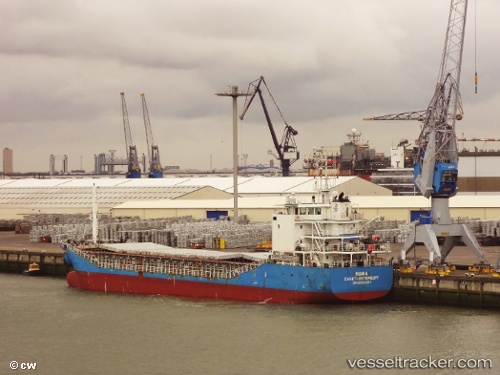 Ship allided with buoy and possible ran aground

On May 16, 2018, a pilot reported that the "Yashma", coming from Kaliningrad, had sailed on a strange course on its way into the port of Frederiksværk. The ship allided with a green fairway buoy and sailed out of the six meter zone in a curve having a draft of 5.2 meters. It berthed in port at 3 p.m. The Danish Maritime Authority estimated that the ship had run aground. The ship left the port again on May 17 at noon and headed to Muuga, ETA May 20, 3 a.m.

On Apr 24, 2018, at 6.45 p.m. the "Yashma", coming from Kaliningrad, ran aground off Frederiksværk. The ship's master did not report the grounding. The Danish police went aboard and tested the crew for alcohol, however, without result. The Danish patrol boat “Askø” from Hundested which was dispatched from the Isefjord supported the investigations and launched a rubber boat to survey the grounding position and possible oil leaks. A boarding team questioned the captain who declared that a strong wind gust had pushed the unloaded ship off course when it left the port of Frederiksværk bound to Kaliningrad. But also a navigational mistake was not ruled out by the investigators. It looked like the ship had dropped anchor, then started the engine and run aground outside the marked fairway. The ship was detained and the hull was to be examined by a diver in preparation of the salvage. The ship remained in pos. 55° 57.13' N 011° 59.78' E by Apr 26. The master had to pay a fine for his late reporting of the grounding. The "Yashma" finally entered the port on Apr 27 at 11.20 a.m. and left on Apr 28 at 2.40 a.m. after investigations. It headed to Kaliningrad. It berthed at the local container terminal on Apr 30 at 6 a.m. Danish reports with photos: https://sn.dk/Halsnaes/Russisk-coaster-i-mystisk-uheld/artikel/741486 http://halsnaes.lokalavisen.dk/2018-04-25/-Russisk-skib-gik-p%C3%A5-grund-2055477.html

Cargo ship in collision with Transat-Racer

The French yachtsman Maxime Sorel competing in The Transat Bakerly Solo Transatlantic Race from Plymouth to New York, was forced to abandon the race on May 3, 2016, after his yacht "V and B" crashed into the "Yashma", which was en route from Figueira da Foz to Gavle, 160 km west of the tip of Penmarc'h, around 10 a.m. Maxime Sorel was among the leaders in the 10-strong Class40 fleet, as the boats raced downwind in the northern Bay of Biscay about 90 nautical miles west of Lorient. At 11.23 a.m. the CROSS Corsen was notified by the Race Director about the accident. The yacht had suffered damage to the bowsprit, forcing Sorel to head to La Trinité sur Mer. Sorel was safe and uninjured and the boat’s mast was stable. The cargo ship continued its voyage. The Navy's operational center in Brest decided to divert a F50M maritime surveillance aircraft for the relocation. 12:34 a.m. the aircraft located the cargo ship who admitted to have collided with the sailboat. At 1:20 p.m. it was ordered to divert to Brest, with an expected arrival at the anchorage in the evening of May 3. The yacht was expected in La Trinité in the morning of May 4. French report with photos: https://www.premar-atlantique.gouv.fr/communiques-presse/collision-entre-cargo-voilier-transat-plymouth-new-york.html