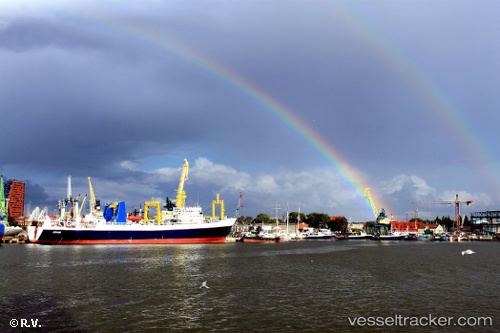 In July 2019 Konecranes received an order from Klaipeda Container Terminal (KCT) in Lithuania for two Ship-to-Shore (STS) cranes, which will be delivered in Q1 2021. The order follows an earlier agreement for a Konecranes Gottwald Model 5 Mobile Harbor Crane, which was delivered in June 2019.

On Monday, Jan. 10, 2019 the liquefied natural gas (LNG) feeder and bunker vessel “Kairos” starts its first reload operation in Klaipėda. Next to the German LNG supplier Nauticor one of the ship’s charterers is oil and liquefied natural gas (LNG) terminal operator Klaipėdos Nafta (KN). “Kairos” being the world’s largest LNG bunker vessel will enhance the LNG logistic chain for KN in the Baltic Sea region. Built at the “Hyundai Mipo” shipyard in South Korea, the ship has started its voyage to Europe in October 2018 and reached Klaipeda at the middle of December.

SSC Klaipedos Smelte in the Port of Klaipeda, Lithuania, has placed a large repeat order with Konecranes for ten Rubber Tired Gantry (RTG) cranes and two Ship-to-Shore (STS) cranes. The delivery of the RTG cranes will be completed in November 2019 and the STS cranes in December 2019.