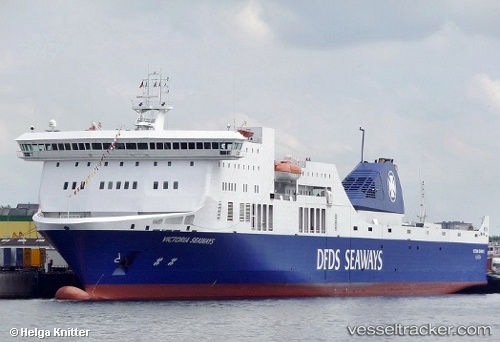 The repair of the "Victoria Seaways", was completed on Apr 27, and the ship left the port of Klaipeda short past midnight bound for Kiel to resume its service. It was expected in Kiel n Apr 28 at 10 p.m. The British cargo ferry "Corrona Seaways" (IMO: 9357597), had berthed in Kiel on Apr 27 at 8 a.m. to ship off some of the cargo waiting to be carried to Klaipeda and sailed at 1 p.m. Photos: http://forum-schiff.de/phpBB3/viewtopic.php?f=9&t=1377#p88845

Vicotria Seaways to be repaired within the forthcoming four days

While experts were still searching for the reason why a truck aboard the "Victoria Seaways" caught fire, setting others alight too, off Bornholm on Apr 23, repairs were already going ahead in the port of Klaipeda. The ship will return to service on Apr 28, missing only two round trips Kiel-Klaipeda. The British cargo ferry "Corrona Seaways", (IMO: 9357597), will be inserted as a replacement to cover the cargo transport from Kiel to Klaipeda. Danish report with photo: http://www.maritimedanmark.dk/?Id=18682

In the night of Apr 23, 2013, a fire broke out aboard the "Victoria Seaways", while the ship was near Bornholm route from Kiel to Klaipeda. The fire was remarked on the ship's main deck at 0:52 a.m., when the ship was about 22 nautical miles from Nexø. The fire extinguishing system was activated and the crew gained quick control of the fire. At the same time the passengers were gathered at the ship assembly stationer to be evacuated from there if necessary. After about one hour the fire was contained, and the ship proceeded to Klaipeda where it wasexpected to arrive at 12:30 a.m. On board were 301 passengers and 37 crew members as well as 160 trailers, containers, trucks, 48 cars and two buses. The extent of damage of goods and vehicles on the car deck could not yet be assessed. None other than the main deck, which is a closed vehicle deck, was affected by the fire. Some cargo units were damaged. For the necessary surveys the whole cargo first had to be unloaded. The return trip to Kiel was cancelled. German report with photo: http://www.mv-online.de/Region-Rheine/Rheine/Brand-auf-Ostseefaehre-verlaeuft-glimpflich-Auch-die-Litauenhilfe-hatte-vor-zweieinhalb-Jahren-ein-aehnliches-Erlebnis-Osteuropahilfe-geraet-in-Seenot