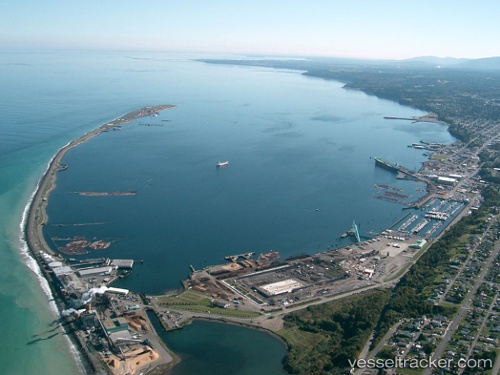 PORT ANGELES, Wash. — An Arctic drilling rig that has made its home in the Port Angeles harbor is expected to depart for Europe. The Peninsula Daily News reports the giant oil drilling platform, the Polar Pioneer, has been welded to a ship owned by a company from the Netherlands. A representative of the U.S. division of that company, Dockwise Shipping, says it is ready to depart on Wednesday. Robb Erickson says the 902-foot semi-submersible heavy-lift ship will take the Polar Pioneer to Norway by following the coast to the Strait of Magellan at the tip of South America. From there it will cross the Atlantic. The Dockwise Vanguard is the largest ship of its type in the world and can lift more than 120,000 tons of cargo. https://marcellus.com/news/id/133694/arctic-drilling-rig-expected-leave-port-angeles-harbor/

City officials estimate approximately $1 million was injected into the Port Angeles economy while the Polar Pioneer was in the Port Angeles Harbor this spring, according to a report released by Shell Oil. The report, Economic Impacts in Puget Sound of Shell's Alaska Exploration Program, was prepared for Shell Exploration & Production Company and the Alaska Chamber by the McDowell Group. [ This story accompanies "Shell report says Alaska oil exploration program brings $172.7 million to Puget Sound communities," http://www.peninsuladailynews.com/article/20150921/NEWS/309219968

Tall ships to sail into Port Angeles, Port Townsend The tall ships Lady Washington and Hawaiian Chieftain are expected to sail into Port Angeles before noon Tuesday, firing a cannon salute before they dock at City Pier. They will offer sails and walk-on tours through the first two weeks of September. Launched in 1989, the Lady Washington is a full-size wooden replica of a brig that accompanied Capt. Robert Gray's expedition to the Pacific Northwest in 1788. The official ship of the state of Washington, the modern Lady Washington has appeared in several movies, including the 2003 "Pirates of the Caribbean: The Curse of the Black Pearl." The Hawaiian Chieftain is a replica of a typical 19th- century merchant trader. Launched in 1988, the steel-hulled vessel was built for trade in the Hawaiian Islands.