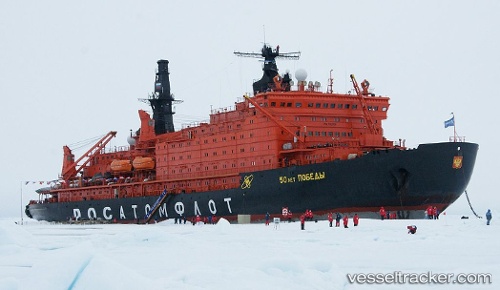 The first voyage of 50 LET POBEDY icebreaker in the tourist season of 2019, the 50th in the history of the icebreaker, has finished in Murmansk, says Russian Geographical Society. The 50 LET POBEDY is Russia’s nuclear-powered icebreaker of Project 10521, the world’s largest one as of today. It was laid down at Baltiysky Zavod shipyard on 4 October 1989 and launched as the Ural icebreaker on 29 December 1993. Further construction was suspended amid lack of financing and resumed in 2003. On 1 February 2007, the ship left for sea trials in the Gulf of Finland which lasted for 2 weeks. The flag hoisting ceremony was held on 23 March 2007 and the ship entered the port of registration, Murmansk, on April 11. According to earlier statements, the icebreaker of FSUE Atomflot with tourists onboard left for the North Pole on 13 June 2019. Source : Portnews

Rosatomflot opens the season of North Pole cruises on June 15

FSUE Atomflot says its nuclear-powered icebreaker 50 Let Pobedy with 125 tourists from Asia and Europe will leave for this year’s first North Pole cruise on June 15th. The Murmansk - North Pole - Murmansk cruise will last for 11 days.