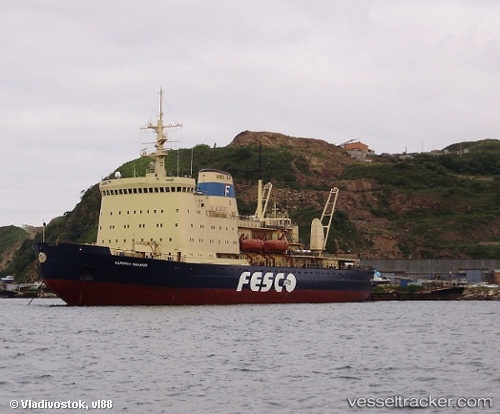 FESCO says its «Admiral Makarov» icebreaker from July to November 2016 will provide pilotage of vessels with containers, general and national economic cargo to the ports and port-points of Chukotka and the Northern Sea Route (NSR) in the eastern sector of the Arctic Region. FESCO carries out this project at the request of the Federal Maritime and River Transport Agency of the Russian Federation. On July 8, 2016 the icebreaker (under the command of Captain Alexander Stelmakh) left the home port of Vladivostok. «Admiral Makarov» will start piloting the vessels in the waters of the NSR on July 16, 2016, by approaching to Cape Dezhnev. FESCOice-class cargo vessels (with ice class Arc 4 and above) also took part in this Arctic summer season transportation. http://www.en.portnews.ru/news/222563/

Two French nationals rescued by Russian icebreaker in the Arctic

The Russian icebreaker "Admiral Makarov" removed two French nationals from the France-flagged catamaran stuck in the ice on the Northern Sea Route, the State Maritime Rescue Coordination Centre of Transportation Ministry of Russia reports. Both the men and their stricken vessel were taken on board the icebreaker which proceeded to Pevek.

On July 23 the icebreaker "Admiral Makarov" arrived in the Arctic to perform escort of cargo vessels convoys to the ports based in Russia’s northern Chukotka and Yakutia, FESCO Group said in a press release. Several vessels of the Far East Shipping Company (FESCO Group) have submitted requests for escort in the Arctic, including: M/V Basil Burhanov, M/V Abakan, M/V Captain Krems, M/V Captain Sergiyevsky, M/V Captain Gnezdilov, M/V FESCO Pevek and M/V FESCO Posiet. The sailing schedule is tentative and is due to further updates during the shipping season. "There is packed ice (6 pts) observed on the route from Cape Dezhneva to the port Pevek, so the first ships that have arrived to the eastern Arctic region will need icebreaker assistance," the company said.