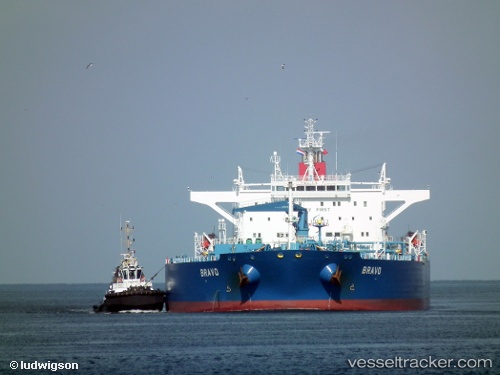 The Privocean", having suffered minor damage in the triple allision, has been deemed seaworthy and left its post-crash anchorage near mile post 162 in the evening of Apr 8. On Apr 9 it was moored at the Grandview anchorage near Gramercy about 12 to 14 miles down river from the crash area. The U.S. Coast Guard has lifted shipping restrictions along a 3-mile stretch of the Mississippi River in St. James Parish. Two-way river traffic was fully restored between mileposts 160 and 163 in the Convent area son Apr 9. The Coast Guard had begun allowing two-way traffic the previous evening once the "Privocean" was moved to an anchorage outside the crash zone. Periodic traffic restrictions were happening late that day and part of Apr 9 for the safety of workers in salvage operations on the "Bravo". The tanker which has notyet been cleared to leave, was moved by tugs from the Ergon terminal in St. James in the afternoon pf Apr 9 and was anchored about 5 to 7 miles upriver of the crash zone at the Burnside anchorage, south of the Sunshine Bridge. Underwater divers have removed a mooring line that had been wrapped around the propeller and rudder. While the holes in the ballast tanks were not a stability concern, they still were in need of repairs. The crew has pumped ballast water out of the ship. The extent of the damage and needed repairs were to be determined once the ship has surveyed. The "Texas" which had to be run ashore near milepost 162 after the crash, was taken in tow to a dry-dock to be surveyed. The watertight integrity of the hull was not harmed in the crash nor during the subsequent grounding. The water the "Texas" took on has been removed. The owner of the tug, the New Orleans-based Crescent Towing, was deciding when and where to repair the vessel. Further cleanup of the oil spill in the river was not needed after assessments found no recoverable oil on Apr 7. Report with photos: http://www.theneworleansadvocate.com/news/12064875-123/mississippi-river-traffic-restrictions-near

The Lower Mississippi River reopened for restricted traffic between mile marker 160 and 163, on Apr 6 at 10 p.m. Coast Guard Sector New Orleans launched two shoreline assessment teams, Tuesday morning, to identify potential shoreline impacts on the Mississippi River and any recoverable oil product from the discharge. A Coast Guard overflight took place from mile marker 165 to 80 to assess any sheen or oil products at 10:15 a.m. Other than a small amount of sheen near the incident location, no sheen or recoverable oil was observed during the overflight. A Coast Guard Station New Orleans 45-foot response boat crew was deployed to conduct a shoreline assessment starting at mile marker 96 and moving upriver. No reports of recoverable product have been received by the shoreline assessment teams, nor have any facilities on the Lower Mississippi River reported pollution. The Coast Guard was actively monitoring the situation of all three vessels and affected areas down river. The Coast Guard continued to evaluate any potential impacts to the environment. Diving operations to complete an on-scene damage assessment were pending due to poor visibility. The "Privocean" was moored at Romeville. The "Bravo" was being held at the loading facility at Ergon Inc. terminal in St. James Parish by the tugs "Admiral Jackson", "David J Cooper", "Linda Taylor" and "Mississippi". An investigation of the extent of damage below the water line was suspended in the afternoon of Apr 7 due to poor visibility. The lower part was also being inspected with side-scan sonar for any signs of damage. An initial inspection determined none of the ship's cargo tanks were breached, but an estimated four ballast tanks sustained damage. Four "Texas" crew members were taken to a local hospital with minor injuries. The tug had begun to take on water and pushed up on the river bank immediately after the accident. The vessel was now headed for a Bollinger Shipyards facility for repairs. Report with photos: http://www.nola.com/environment/index.ssf/2015/04/investigation_of_damage_to_ram.html

US Coastguard responded to multi ship collision on Mississippi

On Apr 6, 2015, the US Coast Guard responded to a collision on the lower Mississippi River near Convent. Watchstanders at Coast Guard Sector New Orleans received a report at approximately 4:00 p.m., that the "Privocean" had broken free from its mooring and drifted down river where it collided with the 98 foot towing vessel "Texas" which was moored at the time. The crew of the "Texas" taken to hospital for medical evaluation but no injuries were reported at this time. The "Privocean" continued to drift down river and also collided with the tank m/v "Bravo", which was off loading crude oil at the time of the incident. The "Bravo" was able to complete emergency shutdown procedures before breaking free of her moorings and connection points, causing an oil spill. The "Privocean" was able to get underway and anchor at mile marker 162. The "Bravo" was half a mile down the river from its original position and could be anchored with a two tug escort. All vessels were being actively being monitored by the U.S. Coast Guard response teams. The Mississippi River was closed from mile marker 163 to mile marker 154. The "Texas" was stable and not taking on water or discharging any oil. The "Bravo" currently had a three tug escort, the vessel was stable but taking on water in the ballast tanks. The "Bravo"’s propeller was fouled with a mooring line, but the ship remained stable at anchor with tug escorts. The facility arms, the source of the discharge, were secured and containment boom was deployed by an Oil Spill Response Organization. Coast Guard response teams along with OMI Environmental Services were responding to the spill. Approximately 126 gallons of oil were spilled on deck of the "Bravo", but was contained and is currently being cleaned. Initial assessments show approximately 420 gallons of oil discharged into the river. The Coast Guard informed the down-river Parish Officials to protect municipal water supplies. U.S. Coast Guard is actively monitoring the situation of all three vessel and affected areas down river. U.S. Coast Guard will continue to evaluate any potential impacts to the environment. The cause of the incident was under investigation. Reports with photos: http://news.list-online.com/runaway-ship-rams-two-others-on-mississippi-river-causing-oil-spill-nbcnews-com/ http://www.wsmv.com/story/28734155/oil-leaks-after-vessel-collision-on-mississippi-river