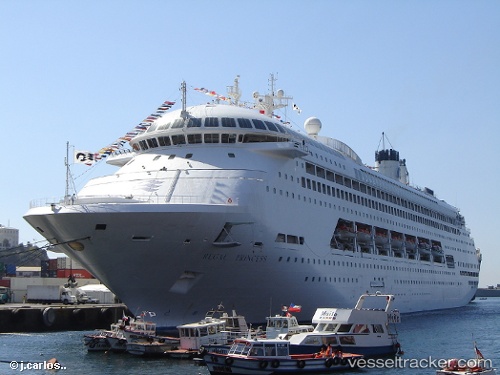 On June 21, 2022, around 7 a.m. the Coastguard and a boat of the RNLI Gravesend were called to the 'Ambience' at the Tilbury Cruise Terminal, across the river from Gravesend. One passenger had to be medevaced due to an urgent medical emergency. A Coastguard helicopter hoisted the patient on a stretcher. Before, the 'Ambience' had come to the London Ferry Terminal Tilbury very quickly, escorted by a tug and the helicopter. Report with photos: https://www.kentonline.co.uk/gravesend/news/passenger-winched-from-cruise-ship-in-dramatic-rescue-269049/

Maiden voyage had to be postponed

The Ambassador Cruise Line,, the first British cruise line to launch in the UK in more than a decade, has been delayed until after the Easter break. The 'Ambience' was set to depart on its maiden voyage on April 6, 2022, but was now not scheduled to set sail until April 25. She has undergone extensive engineering and other works whilst in dry-dock in Durres. The process has been subjected to some significant recent supply-side delays which also led to a temporary lack of availability of marine gas oil in that country. Whilst these have now been resolved, her maiden voyage to Hamburg, originally planned for April 6, has been re-scheduled to now depart on April 20. Her first two sailings to the Norwegian Fjords have subsequently been cancelled. Several delays impacting the extensive programme of works during the period the 'Ambience'was in dry dock could be mitigated, but at present, extensive supply chain disruptions and delays in many commercial areas made it impossible to depart for London Tilbury on the original date which had a knock-on effect to the inaugural sailing programme.

The' Satoshi' has been sold to a new startup cruise company. Having been arrested in Panama late in 2020, theship was recently released and arrived in Bar City in Montenegro on March 27, 2021. The ship was sold to Ocean Builders, which planned to turn it into a cryptocurrency tech hub off the coast of Panama with apartments aboard up for auction. Ocean Builders took delivery of the ship in November 2020, hired a vessel management firm, paid for a drydocking and sailed the ship to Panama, but abandoned the project citing insurance issues. At that point, the vessel was sold for scrap and at the same time, arrested in Panama. After the legal issues were resolved, the cruise ship may have a new life with a new cruise line, starting service later this year.