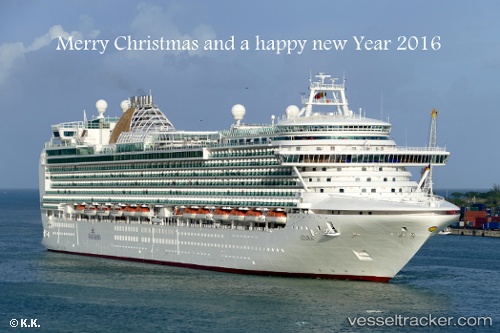 The 'Azura', while en route from Southampton to Weymouth anchorage with 145 crew members on board, suffered a blackout in position 50 18 34.0N, 001 36 41.0 W 20,1 miles, from Catherine's lighthouse on July 8, 2020, around 11 p.m. The crew advised that the vessel was safe to navigate and they were unsure of the reason for the blackout. The defect was rectified and the vessel continued its voyage and berthed at the Mayflower Cruise Terminal in Southampton on July 9 at 5.35 a.m.

Several passengers of the "Azura" had to sleep on camp beds at a basketball court after being stranded in Monte Carlo. 1.170 passengers, who were mostly Brits, were unable to return to the cruise ship due to adverse weather conditions. They had been dropped off by tender boats at 10 a.m. on Sep 28, which were then unable to make the return trip due to choppy waters. But rather than being taken to a hotel, the passengers slept on tables or makeshift beds at a basketball court. Others had camp beds or slept on the floor as no suitable hotels were available. They returned on board on Sep 29. The cruise ship called at Cartagena on Sep 30 before ending in Southampton on Oct 5. Report with photos: https://www.thesun.co.uk/travel/10030901/azura-cruise-passengers-sleep-rough-stranded/https://www.dailymail.co.uk/news/article-7519545/P-O-luxury-cruise-passengers-left-sleep-makeshift-beds-tables-Monte-Carlo.html

On Sep 25 the "Azura", enroute from Cadiz to Barcelona, rescued 20 migrants from an overcrowded dinghy, which was struggling to stay afloat and its passengers waving manically, on Sep 25. The cruise ship - on a three day trip - spent around an hour trying to find the inflatable raft. A lifeboat was then deployed to pick up its struggling passengers, most of whom were men in their late teens and early 20s. The captain informed passengers, most of whom were British, that the "Azura" was being diverted to Almería where the migrants, wrapped in white blankets, were taken off by the Spanish Coastguard and handed to local police. The ship had a delay of about 10 hours. Report with photos: https://www.dailymail.co.uk/news/article-7503963/British-passengers-P-O-cruise-tell-giant-ship-rescued-20-migrants-Spanish-coast.html