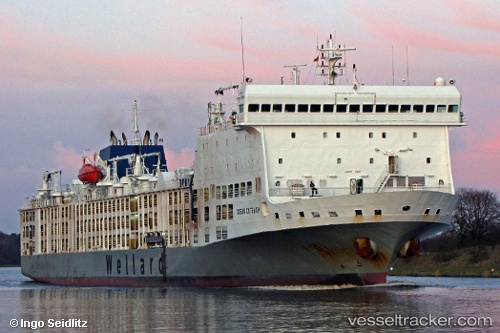 Australian livestock shipping firm Wellard has sold a 2010-built ship OCEAN OUTBACK to Israel’s Dabbah Slaughterhouse for $26m.| Much of the proceeds will go to pay down debts. The livestock vessel, , can transport 6,000 cattle and 25,000 sheep, or a combination of both and is one of a fleet of five owned and operated by Wellard.

Livestock carrier en route to repairs after completing its voyage

The "Ocean Outback" has completed its journey to Ho Chi Minh City on Jan 23 and discharged 5607 cattle to accredited feedlots at the weekend, with only three animals dying during the journey. Including the animals that died before Wellard Live Exports purchased the cattle from Otway Livestock Exports and sailed the vessel, that is a voyage success rate of 99.87 per cent - above the required 99 per cent minimum. The 7500 sheep from the vessel are currently under quarantine in Wellard's feedlot and will be processed in a WA export-accredited abattoir. The "Ocean Outback set sail to Singapore on Jan 24 to repair the malfunction in one of its two engines.

In the afternoon of Jan 9, 2016,, the "Ocean Outback" was brought into Fremantle port to load additional fodder and bedding so the vessel could proceed on its journey to southeast Asia with 5,500 cattle. Meanwhile the 7,500 sheep have been discharged to an export feedlot. When the vessel was in port it was inspected by a Federal Department of Agriculture Veterinarian, a WA Department of Agriculture animal welfare officer and an RSPCA inspector before being given clearance to proceed.