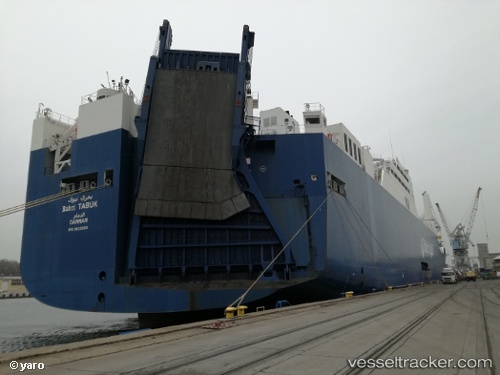 ACAB filed a legal challenge to prevent the Bahri Tabuk from taking delivery of its cargo.

The Paris-based Christians for the Abolition of Torture (ACAT) group sought to block the loading of what it said were munitions onto the "Bahri Tabuk" in Fos-sur-Mer and filed a legal challenge to prevent the vessel from taking delivery of its cargo. "The Bahri Tabuk is due to load French weapons for Saudi Arabia, one of the main belligerents in the Yemeni conflict. ACAT is mobilising and calling on civil society and local networks to prevent these munitions from going to Saudi Arabia". Another Saudi ship the "Bahri Yanbu", left France's northern coast two weeks ago without a cargo of weapons after dockers threatened to block its arrival in the port of Le Havre. ACAT had also filed a legal challenge to stop that consignment being loaded, arguing that it contravened a United Nations treaty because the arms might be used against civilians in the Yemeni conflict. The "Bahri Tabuk" docked in the afternoon of May 28, 2019, and was due to load its cargo on MAy 29. The cargo had initially been due to include electrical transformers. The online investigative site Disclose said on MAy 28 the cargo to be loaded at the port of Marseille-Fos included munitions for Caesar howitzers. Rights groups accuse Riyadh of using the French weapons against civilians in Yemen. Defence Minister Florence Parly had no information on the shipment. A representative in France for the Saudi shipping company involved denied any plans for a weapons shipment, saying the vessel was picking up only electricity production units from Germany's Siemens, for civil use.

The "Bahri Tabuk" loaded 18 containers at Cagliari around Dec 9, 2016, in an undercover operation under supervision and protection of special forces, firefighters and technicians. Activists found out, that the containers were loaded with Germany-made bombs to be used in air strikes against Yemeni rebels. The ship sailed bound for Port Said in the evening of the same day, ETA Dec 13, 2 p.m.

The National Shipping Company of Saudi Arabia (Bahri) announces that it has received on 23rd July 2013 in South Korea, a new vessel specialized in general cargo with a size of 26,000 DWT. The ship was named Bahri Tabuk and it was built by Hyundai MIPO in South Korea. This is the third vessel delivered from the six vessels that were contracted by the Company with this shipyard in 2011 for a total value of SR1,543m. Bahri is an internationally renowned shipping conglomerate specialized in the transportation of oil & gas, petrochemicals, general cargo and dry bulk. It also services the rapidly growing petroleum, petrochemical and infrastructure sectors of the Kingdom of Saudi Arabia. These new vessels are built at Hyundai's MIPO Dockyard in Korea for a price of $70m for each vessel which have been designed for ultimate efficiency and performance. The new RoCon vessels are specialized in carrying general and project cargo and several other types of RoRo cargo. These vessels are equipped with heavy lift cranes with a capacity of 240 tons enabling them to load different type of goods. These vessels are unique in their smaller size compared to the current fleet and have more cargo lifting capabilities with lower fuel consumption. It is estimated that these lighter weight new vessels will consume 45% less fuel thereby decreasing the fuel cost.