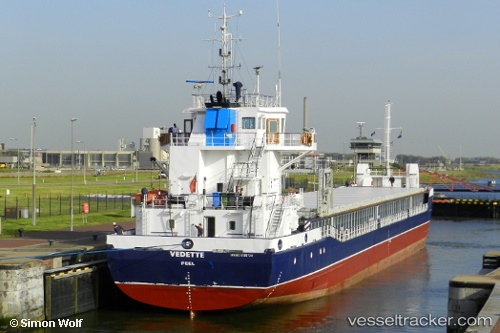 On Jan 31, 2020, at 8.25 p.m. officers of the waer police Brunsbüttel remarked that the 'Baltic Moon' which had just completed its westbound transit of the Kiel Canal and had entered the locks towards the Northsea, was overloaded. The ship was enroute from Frederiksvaerk to Gijon, ETA Feb 5. At 10.15 p.m. the ship backed out of the new southern lock in Brunsbüttel and berthed at the railway station pilings in the canal port. The crew started pumping out ballast water to reduce the draught of the vessel. The ship was detained until everything was in order. It was released and sailed again with corrected draught on Feb 2 at 2 a.m. with an ETA at Gijon as of Jan 6, 5 p.m. now.

On Nov 29, 2019, the 'Baltic Moon' allided with the quay of the west jetty in the outer port of Emden. The ship, coming from Klaipeda, veered off course upon its entry into port at 10.45 a.m. and hit the quay with its port side. The ship was damaged at the bow above the anchor bag. Also the quay wall was damaged. The ship berthed at the Tongue Quay in Emden and was detained until repairs and a class survey have been carried out. The police launched an investigation into the accident. The ship entered EWD - Emder Werft und Dockbetriebe on Dec 6 at 5.20 p.m. for repairs. It sailed on Dec 21 at 8 p.m. Next port of call was Klaipeda with an ETA as of Dec 24. German report with photo: https://www.emderzeitung.de/lokales_artikel,-schiff-rammt-kaimauer-_arid,2046075.html

Freighter lightered and pulled out

After three days aground, the 'Baltic Moon' was refloated by the two tugs 'Valdemar' from Vordingborg Tugger and 'Baltsund' from Svenborg Tugerin the Nakskov Fjord, after some cargo had been lightered. The ship had been on its way to the sugar factory in Nakskov with a cargo of limestone when it missed a turn and got out of the marked fairway for yet unknown reasons on Sep 19 at 6.15 a.m. An environmental vessel found that there were no spills from the grounded ship. After it was pulled out, it had to undergo a thorough dive survey. It berthed at the south quay in Nakskov at 8.50 a.m. and sailed again on Sep 28 at 8.15 a.m. and headed to Liepaja, where she arrived on Sep 30 at 4 a.m. Danish reports with photos: https://maritimedanmark.dk/?Id=41889 https://www.tv2east.dk/artikel/fragtskib-stoedt-paa-grund-i-nakskov-fjord