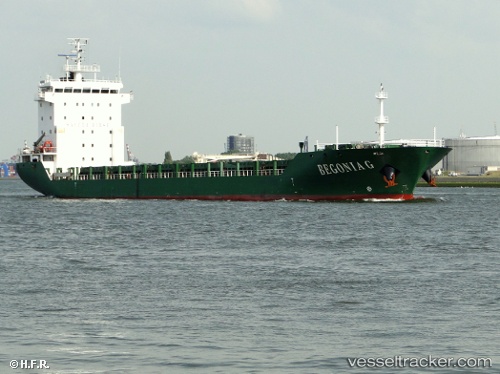 The "Begonia S", which was detained on Nov 4 after the collision with the Polish fishing vessel "Mietus II", was allowed to resume the voyage to Poland in the evening of Nov 5. The requested guarantee came at 8.30 p.m. The ship left the ancorage off Rønne. She berthed at the Gdanski Terminal Kontenerowi in Gdansk on Noc 6 at 3.20 p.m. The case has now been handed over from the Bornholm Police to the Commissioner for Maritime Affairs, which will assess whether to raise charges in connection with the incident. According to Bornholm's police, additional inquiries must also be made in Poland.

On Nov 4, 2018, at 5 a.m. the "Begonia S" enroute from Newport, UK, to Gdansk, was in collision with the Polish 20-m-sport fishing vessel "Miętus II" which had sailed from Kołobrzeg with 16 people, among them three crew members and 13 sport fishermen, nine miles south of Borhnolm in pos. 54 54 00N, 14 39 48E. Only one person was slightly injured and taken to the hospital in Rønne with a head injury by the Danish Sea Rescue Service. Two helicopters and three lifeobats, both lifeboats from Rønne and the "Leopold Rosenfeldt" from Nexø, joined the rescue oeratiuon. The fishermen were recovered from a liferaft. Also the f/v "R 60 - Tasmania responded" to the distress call. The fishing vessel sank after the collision. The "Begonia S" was advised to anchor off the island port for investigations. Is crew of 17 from the Turkey, Georgia and India remained uninjured and was being interrogated. An expert team was sent to Bornholm to check if the wreck of the fishing vessel posed an environmental risk. Danish reports with photos: https://bornholm.nu/?Id=87936 https://bornholm.nu/?Id=87940 https://www.expressen.se/kvallsposten/just-nu-skepp-sjonk-utanfor-bornholm/ http://www.tv2bornholm.dk/?newsID=219982 http://tidende.dk/?Id=90195