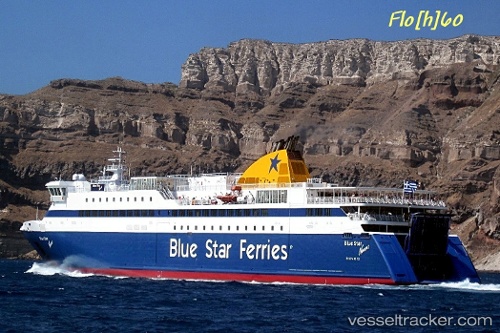 The Naxos Port Authority was informed in the morning of Jan 10, 2021, by the Master of the 'Blue Star Naxos' that, during the approach of the Schinoussa port, while serving the route Katapola - Koufonissi - Schinoussa - Heraklion - Naxos - Paros - Syros - Piraeus, a damage occurred to the central stern ramp, resulting in the non-approach of the ship to the port of Schinoussa. The Port Authority initially prohibited the departure of the ship. After presenting a certificate of class maintenance by the monitoring society, the departure was allowed for a single voyage to the port of Piraeus to repair the damage. There were 73 passengers, 18 cars and eight trucks aboard the ship, which were forwarded to their destinations with the care of the ship owner. A preliminary investigation was carried out by the Port Authority.

Passenger fell ill and died on board

The Naxos Port Authority was informed in the evening of April 24, 2020, by the caaptain of the 'Blue Star Naxos', which had sailed from Naxos for the ports of Heraklion, Schinoussa, Koufonissi, Katapolon-Amorgos, that the ship had th return to the port of Naxos in order to disembark a 77-year-old passenger, who had boarded in Piraeus to Katapola-Amorgos and needed immediate hospital care. After the arrival of the ship in the port, the man was picked up by an EKAB ambulance and transported to the hopsital where his death was confirmed. A preliminary investigation is being carried out by the Port Authority of Naxos.

In the morning Nov 25, 2019, the 'Blue Star Naxos' suffered an inflow of water into two spare buoyancy tanks which had 132 persons, among the 64 passengers, on board. The ferry had attempted to reach the port of Schinoussa and allided with the quay when it was hit by waves off the port in strong winds. As a result water began to enter the tanks. The "Blue Star Naxos" sailed to Naxos where it berthed at 8.45 a.m. and a private diver was at hand to assist. Experts were called to assess the damage. On Nov 25 repairs of the 'Blue Star Naxos' started at Neorion, Syros, which were estimated to be completed by Dec 2.