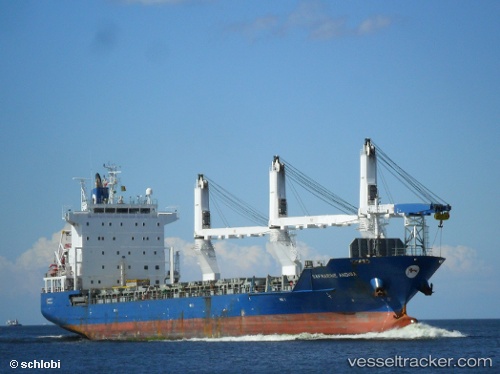 The BOCS Company in Bremen has bought the laid up "Jennifer H" and renamed it "BOCS Vision" for a service between NW Europe and West Africa under Portuguese flag. She left the fishing port on Feb 23 at 2.30 p.m. and headed to Antwerp, where she arrived on Feb 25 at 12.30 a.m. She proceeded to Rouen on March 1, ETA March 2. German report with photo: https://www.weser-kurier.de/bremen/bremen-wirtschaft_artikel,-bremer-reederei-bocs-kauft-erstes-eigenes-schiff-_arid,1805114.html

The "Jennifer H" which has sold by the Swiss federal government has been out of service for four months. Although the ship sails under the flag of Barbados, Switzerland is still liable. The ship is berthed in the port of Bremerhaven since March 31. The former "SCL Andisa" was owned by the Swiss Cargo Line, a holding of the ship owner Hansjürg Grunder, who owned 12 ships guaranteed by the Swiss federal government. Because Grunder became insolvent, the ships were sold at great loss. Ten of the ships were bought by Canadian investors, led by Grunder's former business partner Talal Hallak, one of them being the "Jennifer H". Bank loans of 20 million Swiss Francs were still in the ship when Hallak bought it. He made a bargain, getting the ship forlittle more than three million Francs. The "Jennifer H", enrute from Gijon to Nordenham, got in trouble on March 16 in the English Channel off the French coastdue to engine problems. The crew dropped anchor and carried out repairs. The same evening, the voyage continued, but the next day the engine failed again northwest of Calais due to a leak in the cooling system of the main engine. The same evening, the ship got out of control and drifted along the coast as the anchor dragged. A French emergency tug came to assist. But a little later, the crew again managed to repair the engine, and the loaded with agricultural products, continued its journey. On March 18, she was disabled another time in the North Sea, 35 miles off the Belgian coast and then towed to Bremerhaven. There, the "Jennifer H" is now languishing since four months at the Iceland quay in the orphaned fishing port. Spare parts have been missing for the repair of the ship with the Chinese engine. For the Swiss federal government this was probably no good news because the Canadian buyers bought the ships with warranty. The warranty period was still running. Approximately ten percent of the price paid by the Canadians, totaling approximately 60 million Swiss francs, was based on fiduciary accounts managed by an independent lawyer. Talal Hallak, the buyer of the ships, did not comment on if he considered the "Jennifer H" accident as a guarantee case. Industry experts expected high demands of the buyers who might claim high revenue losses and costs. Assuming 10,000 Swiss Francs per day of lost charter revenue, it could have amounted to 1.2 million Francs. In addition there were the costs for the berth and other expenses, so two to three million Francs could be expected actually. The "Jennifer H" was towed into drydock 5 of the MWB Bremerhaven Shipyard in the foremidday of July 30. German report with photo: https://www.aargauerzeitung.ch/schweiz/bundes-havarie-im-aermelkanal-das-kann-teuer-werden-132821141

Disabled ship under tow to Bremerhaven

The "Jennifer H" was taken in tow off the Belgian coast by the tug "Onyx"(IMO: 9752400 ), which had been called to assist from Protsmouth on March 19. The convoy was now headed to Bremerhaven. The vessel berthed at the Rhenus North in Nordenham on March 23 at 5 p.m.