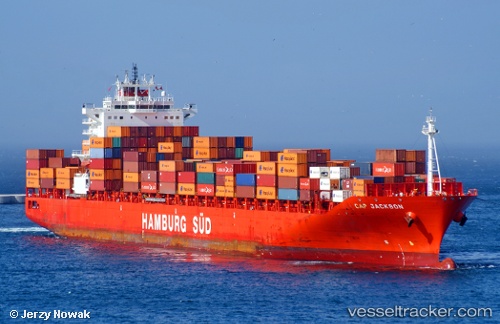 The 'Cap Jackson' suffered a fire in the engine room while at anchor at Balboa, where she had arrived on July 29, 2020, coming from Manzanillo. One crew member was injured, and one generator wascompletely destroyed. The ship, which was enroute to Puerto Colon, remained at anchor at Panama anchorage in pos. 08° 52.69' N 079° 28.02' W on Aug 2.

The "Cap Jackson" arrived at Tristan da Cunha on the evening of Apr 20,2012, to collect one of the zodiac drivers from the "NG Explorer", who had an accident during the visit at Tristan on Mar 19. The container ship arrived at Tristan in the evening and took the woman aboard the vessel, which made a leeway in Boat Harbour, by the Rescue Rib Atlantic Dawn. She had first been looked after in hospital by the medical team, and later moved to stay with an island family.

Hamburg Süd christened the ‘Cap Jackson’ in Manzanillo, Mexico, the first of two identical container ships, which have a slot capacity of 4,600TEU. With the naming ceremony Hamburg Süd staged in Mexico, it was the first time the country had witnessed the christening of a container ship. The vessel measures 264 metre by 32.2 metres with a speed of 22.5 knots. Since her delivery in late May 2010 at the Daewoo Shipbuilding & Marine Engineering (DSME) in Korea, the ‘Cap Jackson’ has been deployed in the shipping group’s service between Asia and Mexico/South America west coast (ASPA Service). The ship is named after a peninsula in the Marlborough region in the south of New Zealand. The sister ship, the ‘Cap Jervis’, is to be christened in Peru in November 2010. Source: Baird Maritime