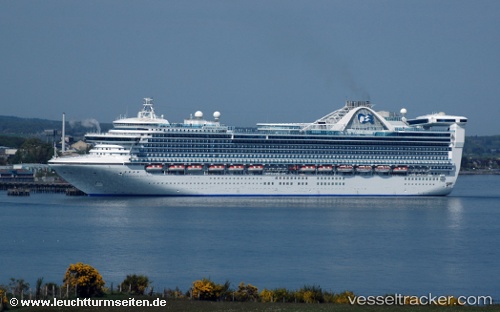 The 'Marina' and 'Caribbean Princess' will carry out an operation to repatriate 59 Costa Rican crew members in the Port of Limón. 17 were aboard the 'Marina' that arrived at the port on June 4, 2020. They will remain on the ship until June 5 when the other ship will arrived to disembark 42 staff. The groups started to disembark at 6:00 a.m. undergoing the same protocol for health screening that is followed at the airport and will also undergo the Covid-19 test. Officials of the Professional Migration Police will be at the dock carrying out the corresponding immigration control, then they will be notified of the sanitary isolation orders for 14 days. Both ships will leave again once the process in Puerto Limón has been completed.

On May 5, 2020, the Dominican Port Authority carried out an operation to disembark eight Dominican citizens who were stranded on the 'Caribbean Princess' in the Port of Santo Domingo. The operation was carried out in coordination with the Ministries of Defense and Public Health. The ship, coming from the Bahamas, was permitted to dock in a humanitarian assistance operation to repatriate Dominicans from the Antillana island. The operation was duly authorized by the High-level Presidential Commission for the management and control of the Covid-19 Pandemic. The port captain followed up on the operation in coordination with the Ministries of Defense and Public Health, as well as the Directorates of the COE, Epidemiology, Migration, CESEP and the Dominican Navy. Once the landing operation was completed and after having been disinfected and inspected according to the Public Health protocol, the Dominican citizens were transferred to a Social Isolation Center to fulfill the quarantine period established by the authorities. The ship then headed to Philipsburg.